Melchior's Dream and Other Tales 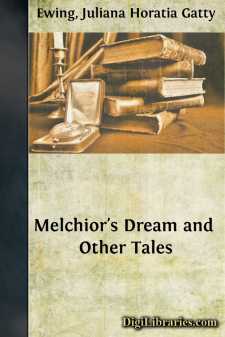 AN ALLEGORY. "Thou that hast given so much to me,Give one thing more—a grateful heart."George Herbert.

"Well, father, I don't believe the Browns are a bit better off than we are; and yet when I spent the day with young Brown, we cooked all sorts of messes in the afternoon; and he wasted twice as much rum and brandy and lemons in his trash, as I should want to make good punch of. He was quite surprised, too, when I told him that our mince-pies were kept shut up in the larder, and only brought out at meal-times, and then just one apiece; he said they had mince-pies always going, and he got one whenever he liked. Old Brown never blows up about that sort of thing; he likes Adolphus to enjoy himself in the holidays, particularly at Christmas."

The speaker was a boy—if I may be allowed to use the word in speaking of an individual whose jackets had for some time past been resigned to a younger member of his family, and who daily, in the privacy of his own apartment, examined his soft cheeks by the aid of his sisters' "back-hair glass." He was a handsome boy too; tall, and like David—"ruddy, and of a fair countenance;" and his face, though clouded then, bore the expression of general amiability. He was the eldest son in a large young family, and was being educated at one of the best public schools. He did not, it must be confessed, think either small beer or small beans of himself; and as to the beer and beans that his family thought of him, I think it was pale ale and kidney-beans at least.

Young Hopeful had, however, his weak points like the rest of us; and perhaps one of the weakest was the difficulty he found in amusing himself without bothering other people. He had quite a monomania for proposing the most troublesome "larks" at the most inconvenient moments; and if his plans were thwarted, an Æolian harp is cheerful compared to the tone in which, arguing and lamenting, he

to the distraction of every occupied member of the household.

When the lords of the creation of all ages can find nothing else to do, they generally take to eating and drinking; and so it came to pass that our hero had set his mind upon brewing a jorum of punch, and sipping it with an accompaniment of mince-pies; and Paterfamilias had not been quietly settled to his writing for half-an-hour, when he was disturbed by an application for the necessary ingredients. These he had refused, quietly explaining that he could not afford to waste his French brandy, etc., in school-boy cookery, and ending with, "You see the reason, my dear boy?"

To which the dear boy replied as above, and concluded with the disrespectful (not to say ungrateful) hint, "Old Brown never blows up about that sort of thing; he likes Adolphus to enjoy himself in the holidays."

Whereupon Paterfamilias made answer, in the mildly deprecating tone in which the elder sometimes do answer the younger in these topsy-turvy days:—

"That's quite a different case. Don't you see, my boy, that Adolphus Brown is an only son, and you have nine brothers and sisters?...