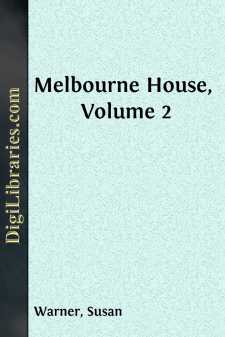 The next day turned out so warm, that the carriage was not brought for Daisy till late in the afternoon. Then it came, with her father and Dr. Sandford; and Daisy was lifted in Mr. Randolph's arms and carefully placed on the front seat of the carriage, which she had all to herself. Her father and the doctor got in and sat opposite to her; and the carriage drove away.

The parting with Juanita had been very tenderly affectionate and had gone very near to Daisy's heart. Not choosing to shew this more than she could help, as usual, Daisy at first lay still on the cushions with an exceedingly old-fashioned face; it was as demure and sedate as if the gravity of forty years had been over it. But presently the carriage turned the corner into the road to Melbourne; Daisy caught sight for a second of the houses and church, spires of Crum Elbow, that she had not seen for so long. A pink flush rose over her face.

"What is it, Daisy?" said Mr. Randolph, who had been watching her.

"You had a pretty dull time of it at Mrs. Benoit's?" remarked the doctor.

"How did you escape that, Daisy?"

"I do not know, Dr. Sandford. There was no room for dulness."

The gentlemen smiled, but Daisy's father with a not altogether satisfied expression. He grew satisfied, as he marked the changes in Daisy's face. The ride was delightful to her. The carriage was easy; she was nicely placed; and through the open glass before her she could look out quite uninterruptedly. It was so pleasant, she thought, even to see the road and the fences again. That little bit of view before Mrs. Benoit's window she had studied over and over till she knew it by heart. Now every step brought something new; and the roll of the carriage wheels was itself enlivening. There was a reaped grain field; there a meadow with cattle pasturing. Now they passed a farm wagon going home, laden with sheaves; next came a cottage, well known but not seen for a long time, with its wonted half door open and the cottager's children playing about. Then came patches of woodland, with the sun shining through; and a field of flourishing Indian corn with the sunlight all over it; then more meadows with cattle.

"Do you ride comfortably, Daisy?" her father asked, bending over to her.

Mr. Randolph gave up care about Daisy, and the two gentlemen fell into a conversation which did not regard her, and lasted till the carriage stopped at the door of Melbourne House. And there was her mother, and there were Preston and his mother and sister, and Gary McFarlane, who had been away and come back again, all waiting to welcome her; besides some other guests who were now at Melbourne.

Mr. Randolph, got out of the carriage first. Dr. Sandford followed him; but then without giving place to anybody else, he himself took Daisy carefully off the seat where she lay, lifted her out in his arms, and carried her into the house....