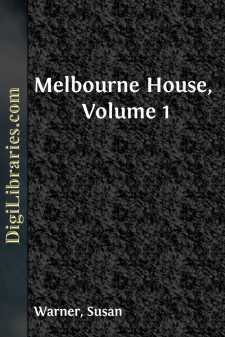 A little girl was coming down a flight of stairs that led up from a great hall, slowly letting her feet pause on each stair, while the light touch of her hand on the rail guided her. The very thoughtful little face seemed to be intent on something out of the house, and when she reached the bottom, she still stood with her hand on the great baluster that rested on the marble there, and looked wistfully out of the open door. So the sunlight came in and looked at her; a little figure in a white frock and blue sash, with the hair cut short all over a little round head, and a face not only just now full of some grave concern, but with habitually thoughtful eyes and a wise little mouth. She did not seem to see the sunlight which poured all over her, and lit up a wide, deep hall, floored with marble, and opening at the other end on trees and flowers, which shewed the sunlight busy there too. The child lingered wistfully. Then crossed the hall, and went into a matted, breezy, elegant room, where a lady lay luxuriously on a couch, playing with a book and a leaf-cutter. She could not be busy with anything in that attitude. Nearly all that was to be seen was a flow of lavender silk flounces, a rich slipper at rest on a cushion, and a dainty little cap with roses on a head too much at ease to rest. By the side of the lavender silk stood the little white dress, still and preoccupied as before—a few minutes without any notice.

"Do you want anything, Daisy?"

"Mamma, I want to know something."

"Mamma"—Daisy seemed to be engaged on a very puzzling question—"what does it mean to be a Christian?"

"What?" said her mother, rousing herself up for the first time to look at her.

"To be a Christian, mamma?"

"It means, to be baptized and go to church, and all that," said the lady, turning back to her book.

"I don't know what you mean. What has put it into your head?"

"What absurd nonsense! Who is Mr. Dinwiddie?"

"You know him. He lives at Mrs. Sandford's."

"And where did he talk to you?"

"In the little school in the woods. In his Sunday-school. Yesterday."

"Well, it's absurd nonsense, your going there. You have nothing to do with such things. Mr. Randolph?—"

An inarticulate sound, testifying that he was attending, came from a gentleman who had lounged in and was lounging through the room.

"I won't have Daisy go to that Sunday-school any more, down there in the woods. Just tell her she is not to do it, will you? She is getting her head full of the most absurd nonsense. Daisy is just the child to be ruined by it."

"You hear, Daisy," said Mr. Randolph, indolently, as he lounged finally out of the room by an open window; which, as did all the windows in the room, served for a door also. By the door by which she had entered, Daisy silently withdrew again, making no effort to change the resolution of either of her parents. She knew it would be of no use; for excessively indulgent as they both were in general, whenever they took it upon them to exercise authority, it was unflinchingly done....