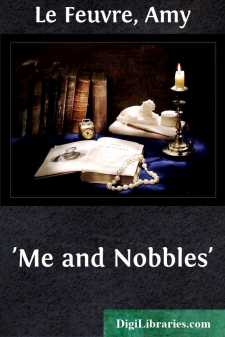 It was a very silent old house.

Outside, the front windows stared gravely down upon the tidy drive with its rhododendron shrubberies, the well-kept lawn with the triangular beds, and the belt of gloomy fir trees edging the high brick wall that ran along the public road. The windows were always draped and curtained, and opened one foot at the top with monotonous regularity. No one was ever seen leaning out of them, or even pushing back the curtains to widen their view. There was a broad flight of steps, and a ponderous door which, when opened, disclosed a long hall, at the end of which was a gaily flowered conservatory. Instinct made people tread gently upon the thick Turkey rugs that were laid upon the polished floor; there was a stillness in the house that seemed to chill one. If you peeped into the big dining-room, the portraits upon the wall eyed you with disapproval; the table, which was always laid with snowy-white cloth and shining silver, seemed severely austere and formal; the high back chairs and the massive sideboards bade you respect their age.

The drawing-room was quite as awe-inspiring, for the blinds were nearly always down, and it had a musty unused scent telling you that its grandeur was not for daily use. The library was gloomier still. Its windows were of stained glass; books of the dingiest hue surrounded you; they lined the walls; and the furniture and carpet matched them in tone. Ghostly busts on pedestals, scientific machines, and a huge geographical and astronomical globe added to its gloom. The sun had a way of only hastily shining in when he could not help himself, and he left it till the last moment just before he went to bed. He was not fond of that room, and there was no one in the house that was.

Then there was the morning room, and this was where old Mrs. Egerton spent most of her day. She was a tall severe old lady with no sense of humour and a very strong will. She spent an hour after breakfast with her cook, for housekeeping was her hobby; then she sat at her table writing letters and doing her accounts till luncheon, after which she always went for a drive. In the evening after dinner she read the paper or some solid book, knitted, and retired early to bed. Her daughter, Miss Anna Egerton, was very like her, only she was seldom seen indoors. She was full of good works, and was never idle, for she had more business than she could possibly get through, and her days were so crowded that meals seemed quite an effort. The man of the house, Mrs. Egerton's son, was also always out, and when at home spent his leisure moments in his smoking-room. London claimed most of his time, for he was in a government office, and went to and fro by train, thinking nothing of the hours spent twice a day in a railway carriage.

'A very dull house indeed,' a lady visitor thought at the end of her first day there; and yet, in spite of its quietness, there were just a few indications of another element that puzzled her....