Maw's Vacation The Story of a Human Being in the Yellowstone 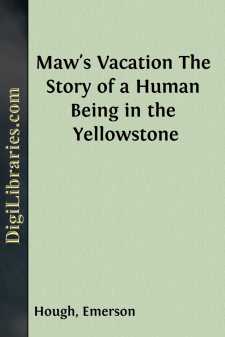 Times has changed, says Maw to herself, says she. Things ain't like what they used to be. Time was when I worked from sunup to sundown, and we didn't have no daylight-saving contraptions on the old clock, neither. The girls was too little then, and I done all the work myself—cooking, sweeping, washing and ironing, suchlike. I never got to church Sundays because I had to stay home and get the Sunday dinner. Like enough they'd bring the preacher home to dinner. You got to watch chicken—it won't cook itself. Weekdays was one like another, and except for shoveling snow and carrying more coal I never knew when summer quit and winter come. There was no movies them days—a theater might come twice a winter, or sometimes a temperance lecturer that showed a picture of the inside of a drunkard's stomach, all redlike and awful. We didn't have much other entertainment. Of course we had church sociables now and then, or a surprise party on someone. Either way, the fun no more than paid for the extra cooking. I never seen nothing or went nowhere, and if when I was down town after the groceries I'd 'a' stepped into the drug store and bought me a lemonade—and they didn't have no nut sundaes then—they'd of had me up before the church for frivolous conduct.

Of course Paw kicks about the crops and prices, but I've been living with Paw forty years, and I dunno as I can remember a time when he didn't kick. He kicks now on the wages he pays these city boys that come out to farm; says they're no good at all. But somehow or other, things gets raised. I notice the last few years we somehow have had more clothes and things, and more money in the bank. When Paw bought the automobile he didn't ask the minister if it was right, and he didn't have to ask the bank for a consent, neither. Cynthy's back from college, and it's all paid for somehow. Jimmy's in a mail-order store in Chicago. I've got a girl to help me that calls herself a maid, which is all right enough, though we used to call Judge Harmsworth's help a girl and let it go at that, law me! My other girls, Hattie and Roweny, are big enough to help a lot, and Paw reasons with them considerable about it. I've always been so used to work that I think I can do it better myself. I always like to do for my children.

But Paw, ever since I married him, has been one of those energetics. They call him an aggressive business man. Some of them call him a dominant man, because of his whiskers, though he knows well enough about how scared of him I am. Only time I ever was scared of Paw was when he got the car. I thought he would break his fool neck and kill Roweny, that had clim in with him. He did break down the fence in front of the house and run over the flower beds and all.

The Park-Bound Throng of Maws

But this summer we allowed we all would get in the car and take a big trip out West—go right into some of the parks, if nothing happened.

We borrowed our tent from the Hickory Bend Outing Club that Paw belongs to back home. The poles go along the fenders and stick out a good way behind. I could always cook without a stove, from experience at picnics when I was younger. The dishes goes in a box. Paw nailed a rack on top of the fenders, and we carry a lot of stuff that way. Cynthy always has her suitcase on the outside because it's the newest one. The other girls set on the bedding on the rear seat, and I ride in front with Paw. We mostly wear overalls.

As a dispassionate observer in one of our national parks, expressing the belief in modern speech, I'll say they have. I have met Maw this summer, ninety thousand of her, concentrated on a piece of mountain scenery about fifty miles square—Maw on her first vacation in a life of sixty years. Dear old Maw!

Ninety thousand replicas of Maw cause the rest of us to eat copiously of alkaline dust and to shiver each time we approach a turn on the roads of Yellowstone Park, which were laid out on a curling iron. You cannot escape seeing Paw and Maw, and Cynthy in her pants, and Hattie and Roweny in overalls and putties. I have seen their camp fire rising on every remaining spot of grass on all that busy fifty miles. I have photographed Maw and Cynthy and the other girls, and Cynthy has photographed me because I looked funny....