Materials Toward a Bibliography of the Works of Talbot Mundy 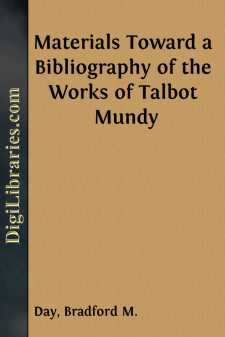 A Bit of His Life

Talbot Mundy was born in London on April 23, 1879. He was educated at Rugby, and served nearly ten years, beginning in 1900, as a government official in Africa and India. While in India, he wandered all over the sub-continent on horseback, and even into Tibet. Eastern occult lore first attracted, then fascinated, his active and unorthodox mind. Mundy absorbed all he could learn of the Indian beliefs.

Government service next brought him to Africa where he studied first-hand the nature magic of many of the tribes and cultures of East Africa. His quest for more information on this subject impelled him to travel extensively through Egypt and the Near East and even into parts of Arabia. This was truly adventurous at the time, but only in character with the man who killed dozens of lions and successfully hunted for ivory.

Mundy visited Australia, and Mexico as far south as Yucutan. He first arrived in the United States in 1911, and liked the country so much that he decided to stay and become a citizen.

Mundy quickly turned his energies to writing, and an article, "Pig Sticking in India," was accepted and published in the April 1911 issue of Adventure Magazine, itself only a few months old. Another article and his first story, "The Phantom Battery" soon appeared. For years thereafter, Adventure had short stories, novelettes, novels, and serials by this master teller of tales in most of the issues that were printed.

The motif and locale of the stories and very infrequent articles usually stemmed from the areas, people, and occult knowledge previously mentioned. The manly art of self defense must have occupied some of Mundy's attention during his early career. A series of stories about Billy Blain, pugilist, appeared under the pen-name of Walter Gait, beginning with the February 1912 issue of Adventure. Two articles were also printed under this pseudonym.

Scribners of New York produced his first book, "Rung Ho" in 1914, then apparently forgot him. In 1916, Bobbs-Merrill of Indianapolis published one of his most famous stories, "King—of the Khyber Rifles," and Cassell and Company of London brought out "The Winds of the World." Both were well received, and Mundy's career to a moderate renown was on its way.

In succeeding years he continued to write for Adventure and other magazines, most of the stories being snapped up by various book publishers. Many of the books were reprinted in several editions by different companies, and, confusing to a bibliophile, the English publications ware often re-titled.

During the 1920's Mundy bought a part of the Point Loma estate inCalifornia, called The Cliffs. He settled there for several years andbecame a member of the Theosophical Society presided over by KatherineTingley. A half-dozen of his books were written there and, "Om; theSecret of Ahbor Valley," shows the influence of this occult society.

He contributed many articles to Tingley's theosophical magazines, her most noted publication being the Theosophical Path....