Materials and Methods of Fiction With an Introduction by Brander Matthews 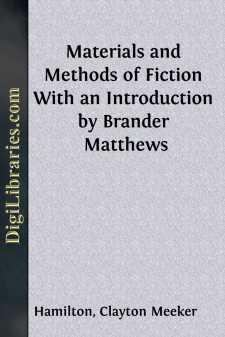 In our time, in these early years of the twentieth century, the novel is the prosperous parvenu of literature, and only a few of those who acknowledge its vogue and who laud its success take the trouble to recall its humble beginnings and the miseries of its youth. But like other parvenus it is still a little uncertain of its position in the society in which it moves. It is a newcomer in the literary world; and it has the self-assertiveness and the touchiness natural to the situation. It brags of its descent, although its origins are obscure. It has won its way to the front and it has forced its admission into circles where it was formerly denied access. It likes to forget that it was once but little better than an outcast, unworthy of recognition from those in authority. Perhaps it is still uneasily conscious that not a few of those who were born to good society may look at it with cold suspicion as though it was still on sufferance.

Story-telling has always been popular, of course; and the desire is deep-rooted in all of us to hear and to tell some new thing and to tell again something deserving remembrance. But the novel itself, and the short-story also, must confess that they have only of late been able to claim equality with the epic and the lyric, and with comedy and tragedy, literary forms consecrated by antiquity. There were nine muses in Greece of old, and no one of these daughters of Apollo was expected to inspire the writer of prose-fiction. Whoever had then a story to tell, which he wished to treat artistically, never dreamed of expressing it except in the nobler medium of verse, in the epic, in the idyl, in the drama. Prose seemed to the Greeks, and even to the Latins who followed in their footsteps, as fit only for pedestrian purposes. Even oratory and history were almost rhythmic; and mere prose was too humble an instrument for those whom the Muses cherished. The Alexandrian vignettes of the gentle Theocritus may be regarded as anticipations of the modern short-story of urban local color; but this delicate idyllist used verse for the talk of his Tanagra figurines.

Even when the modern languages entered into the inheritance of Latin and Greek, verse held to its ancestral privileges, and the brief tale took the form of the ballad, and the longer narrative called itself a chanson de geste. Boccaccio and Rabelais and Cervantes might win immediate popularity and invite a host of imitators; but it was long after their time before a tale in prose, whether short or long, achieved recognition as worthy of serious critical consideration. In his study of Balzac, Brunetière recorded the significant fact that no novelist, who was purely and simply a novelist, was elected to the French Academy in the first two centuries of its existence. And the same acute critic, in his "History of Classical French Literature," pointed out that French novels were under a cloud of suspicion even so far back as the days of Erasmus, in 1525. It was many scores of years thereafter before the self-appointed guardians of French literature esteemed the novel highly enough to condescend to discuss it....