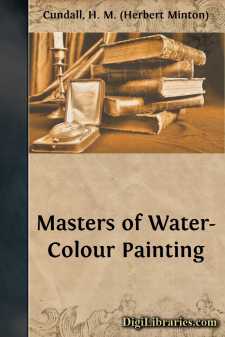 The earliest form of painting was with colours ground in water. Egyptian artists three thousand years B.C. used this method, and various mediums, such as wax and mastic, were added as a fixative. It was what is now known as tempera painting. The Greeks acquired their knowledge of the art from the Egyptians, and later the Romans dispersed it throughout Europe. They probably introduced tempera painting into this country for decoration of the walls of their houses. The English monks visited the Continent and learnt the art of miniature painting for illuminating their manuscripts by the same process. Owing to opaque white being mixed with the colours the term of painting in body-colour came in use. Painting in this manner was employed by artists throughout Europe in making sketches for their oil paintings.

Two such drawings by Albrecht Dürer, produced with great freedom in the early part of the sixteenth century, are in the British Museum. The Dutch masters also employed the same means. Holbein introduced the painting of miniature portraits into this country, for although the monks inserted figures in their illuminations, little attempt was made in producing likenesses. As early as the middle of the seventeenth century the term “water colours” came into use. In an inventory, in manuscript, of the personal estate of Charles I, which was sold by an Act of Parliament, numerous pictures are thus described.

Wenceslaus Hollar, a native of Prague, came to England in 1637, and became drawing-master to the Prince of Wales and the Duke of York. The painting of landscapes was first introduced by him into this country. He made topographical drawings with a reed pen, and afterwards added slight local colours. The earliest Englishman known to follow this style was Francis Barlow. He is principally noted for his drawings with a pen, slightly tinted, of animals and birds, with landscapes in the background. Later, Peter Monamy, a marine painter who was born in Jersey, produced drawings in a similar manner. Early in the eighteenth century Pieter Tillemans came to England, and painted hunting scenes, race-horses and country-seats. He worked in a free style in washes of colour without any outlines with a pen or underlying grey tints. To a “Natural History of Birds,” by George Edwards, library keeper to the Royal College of Physicians, published in 1751, is added an appendix, entitled, “A Brief and General Idea of Drawing and Painting in Water Colours: Intended for the amusement of the curious rather than the instruction of artists.” In it he states, “There are two ways of painting in water colours: one by mixing white with your colours and laying on a thick body; the other is only washing your paper or vellum with a thin water tinctured with colour.” After giving details of the methods to be employed he adds, “the former method of using water colours is called painting and the other washing or staining.” During the latter half of the century it became a fashion for landed gentry to have engravings made of their country seats, and antiquarian publications with illustrations were produced....