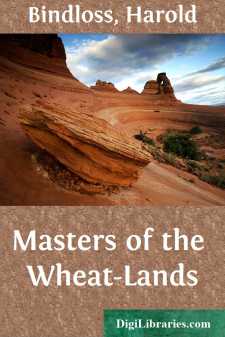 The frost outside was bitter, and the prairie which rolled back from Lander’s in long undulations to the far horizon, gleamed white beneath the moon, but there was warmth and brightness in Stukely’s wooden barn. The barn stood at one end of the little, desolate settlement, where the trail that came up from the railroad thirty miles away forked off into two wavy ribands melting into a waste of snow. Lander’s consisted then of five or six frame houses and stores, a hotel of the same material, several sod stables, and a few birch-log barns; and its inhabitants considered it one of the most promising places in Western Canada. That, however, is the land of promise, a promise which is in due time usually fulfilled, and the men of Lander’s were, for the most part, shrewdly practical optimists. They made the most of a somewhat grim and frugal present, and staked all they had to give—the few dollars they had brought in with them, and their powers of enduring toil—upon the roseate future.

Stukely had given them, and their scattered neighbors, who had driven there across several leagues of prairie, a supper in his barn. A big rusty stove, brought in for the occasion, stood in the center of the barn floor. Its pipe glowed in places a dull red, and now and then Stukely wondered uneasily whether it was charring a larger hole through the shingles of the roof. On one side of the stove the floor had been cleared; on the other, benches, empty barrels and tables were huddled together, and such of the guests as were not dancing at the moment, sat upon the various substitutes for chairs. A keg of hard Ontario cider had been provided for the refreshment of the guests, and it was open to anybody to ladle up what he wanted with a tin dipper. A haze of tobacco smoke drifted in thin blue wisps beneath the big nickeled lamps, and in addition to the reek of it, the place was filled with the smell of hot iron which an over-driven stove gives out, and the subtle odors of old skin coats.

The guests, however, were accustomed to an atmosphere of that kind, and it did not trouble them. For the most part, they were lean, spare, straight of limb and bronzed by frost and snow-blink, for though scarcely half of them were Canadian born, the prairie, as a rule, swiftly sets its stamp upon the newcomer. Also, there was something in the way they held themselves and put their feet down that suggested health and vigor, and, in the case of most of them, a certain alertness and decision of character. Some were from English cities, a few from those of Canada, and some from the bush of Ontario; but there was a similarity among them for which the cut and tightness of their store clothing did not altogether account. They lived well, though plainly, and toiled out in the open unusually hard. Their eyes were steady, their bronzed skin was clear, and their laughter had a wholesome ring.

A fiery-haired Scot, a Highlander, sat upon a barrel-head sawing at a fiddle, and the shrill scream of it filled the barn....