Masterpieces of American Wit and Humor 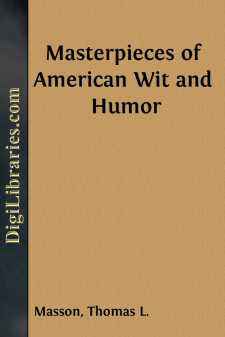 A PLEA FOR HUMOR

More than half a dozen years have passed since Mr. Andrew Lang, startled for once out of his customary light-heartedness, asked himself, and his readers, and the ghost of Charles Dickens—all three powerless to answer—whether the dismal seriousness of the present day was going to last forever; or whether, when the great wave of earnestness had rippled over our heads, we would pluck up heart to be merry and, if needs be, foolish once again. Not that mirth and folly are in any degree synonymous, as of old; for the merry fool, too scarce, alas! even in the times when Jacke of Dover hunted for him in the highways, has since then grown to be rarer than a phenix. He has carried his cap and bells and jests and laughter elsewhere, and has left us to the mercies of the serious fool, who is by no means so seductive a companion. If the Cocquecigrues are in possession of the land, and if they are tenants exceedingly hard to evict, it is because of the encouragement they receive from those to whom we innocently turn for help: from the poets, novelists and men of letters whose duty it is to brighten and make glad our days.

"It is obvious," sighs Mr. Birrell dejectedly, "that many people appear to like a drab-colored world, hung around with dusky shreds of philosophy"; but it is more obvious still that, whether they like it or not, the drapings grow a trifle dingier every year, and that no one seems to have the courage to tack up something gay. What is much worse, even those bits of wanton color which have rested generations of weary eyes are being rapidly obscured by somber and intricate scroll-work, warranted to oppress and fatigue. The great masterpieces of humor, which have kept men young by laughter, are being tried in the courts of an orthodox morality and found lamentably wanting; or else, by way of giving them another chance, they are being subjected to the peine forte et dure of modern analysis, and are revealing hideous and melancholy meanings in the process. I have always believed that Hudibras owes its chilly treatment at the hands of critics—with the single and most genial exception of Sainte-Beuve—to the absolute impossibility of twisting it into something serious. Strive as we may, we cannot put a new construction on those vigorous old jokes, and to be simply and barefacedly amusing is no longer considered a sufficient raison d'etre. It is the most significant token of our ever- increasing "sense of moral responsibility in literature" that we should be always trying to graft our own conscientious purposes upon those authors who, happily for themselves, lived and died before virtue, colliding desperately with cakes and ale, had imposed such depressing obligations.

"'Don Quixote,'" says Mr. Shorthouse with unctuous gravity, "will come in time to be recognized as one of the saddest books ever written"; and, if the critics keep on expounding it much longer, I truly fear it will. It may be urged that Cervantes himself was low enough to think it exceedingly funny; but then one advantage of our new and keener insight into literature is to prove to us how indifferently great authors understood their own masterpieces....