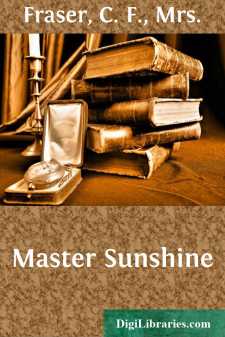 CHAPTER I. WHO HE WAS.

Of course his real name was not Master Sunshine.

Who ever heard of a boy with a name like that?

But his mother said that long before he could speak he chose the name for himself, for even as a baby he was full of a cheery good humor that was always sparkling out in his winning smiles and his rippling laugh. He was a good-natured, happy child from the time that he could toddle about; and he was very young when he began to give pleasure to his friends by serving them in all the little ways within his power.

The very golden curls that topped his small head glistened as if they had caught and imprisoned the glory of the morning sun; and it really did seem as if a better name could not be found for the merry, helpful little fellow than Master Sunshine.

His real name was a very different affair—Frederick Alexander Norton—and his boy friends called him Freddy for short. His little sister Lucy called him "buzzer" and Suns'ine; and Almira Jane, the help, who made the brownest and crispest of molasses cookies, and the most delicious twisted doughnuts, said he was a "swate angel of light," except at such times as she called him a "rascalpion."

Master Sunshine never stopped to argue with Almira Jane when she called him a "rascalpion." He knew that this was a plain sign that she was getting "nervous;" and when Almira Jane was nervous, it was always best for small boys to be out of the way.

A little later, when the kitchen floor had been scrubbed, and the stove polished like a shiny black mirror, and the bread-dough had been kneaded and set to rise, he knew he would be a welcome visitor again.

Perhaps that was one of the many reasons why people loved him so. He was always considerate. He had the good sense not to keep on asking questions and offering help when it was best to go quietly away. Somehow he always felt sure that his turn would come presently, and that Almira Jane would be sorry she had called him such a hard name, and would be only too pleased to have him look over the beans for the bean-pot, and fill the wood-box, and do all the other little kitchen chores that he delighted in.

There were sure to be pleasant times after one of Almira Jane's nervous attacks. When she was quite over her flurry and worry, Daisy, the Maltese cat, would crawl out of her hiding-place under the stove, and arch her tail, and purr contentedly as she rubbed her long, graceful body against the table-legs; while Gyp, the pet dog, would hurry in from the dog-house under the shade of the orchard-trees, and jump on Almira Jane's shoulder, and she would be as pleased as possible over his knowing ways. At such times Master Sunshine was very fond of Almira Jane.

He loved Lucy with a steady affection, too, though she pulled his curls sometimes until he fairly expected to lose the whole of his golden locks. She needed a great deal of patient amusement, too, and she was not very considerate of his belongings.

One day he was very angry, and his hand was lifted in anger against her....