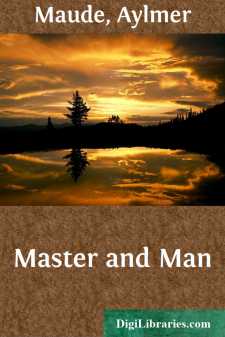 It happened in the 'seventies in winter, on the day after St. Nicholas's Day. There was a fete in the parish and the innkeeper, Vasili Andreevich Brekhunov, a Second Guild merchant, being a church elder had to go to church, and had also to entertain his relatives and friends at home.

But when the last of them had gone he at once began to prepare to drive over to see a neighbouring proprietor about a grove which he had been bargaining over for a long time. He was now in a hurry to start, lest buyers from the town might forestall him in making a profitable purchase.

The youthful landowner was asking ten thousand rubles for the grove simply because Vasili Andreevich was offering seven thousand. Seven thousand was, however, only a third of its real value. Vasili Andreevich might perhaps have got it down to his own price, for the woods were in his district and he had a long-standing agreement with the other village dealers that no one should run up the price in another's district, but he had now learnt that some timber-dealers from town meant to bid for the Goryachkin grove, and he resolved to go at once and get the matter settled. So as soon as the feast was over, he took seven hundred rubles from his strong box, added to them two thousand three hundred rubles of church money he had in his keeping, so as to make up the sum to three thousand; carefully counted the notes, and having put them into his pocket-book made haste to start.

Nikita, the only one of Vasili Andreevich's labourers who was not drunk that day, ran to harness the horse. Nikita, though an habitual drunkard, was not drunk that day because since the last day before the fast, when he had drunk his coat and leather boots, he had sworn off drink and had kept his vow for two months, and was still keeping it despite the temptation of the vodka that had been drunk everywhere during the first two days of the feast.

Nikita was a peasant of about fifty from a neighbouring village, 'not a manager' as the peasants said of him, meaning that he was not the thrifty head of a household but lived most of his time away from home as a labourer. He was valued everywhere for his industry, dexterity, and strength at work, and still more for his kindly and pleasant temper. But he never settled down anywhere for long because about twice a year, or even oftener, he had a drinking bout, and then besides spending all his clothes on drink he became turbulent and quarrelsome. Vasili Andreevich himself had turned him away several times, but had afterwards taken him back again—valuing his honesty, his kindness to animals, and especially his cheapness. Vasili Andreevich did not pay Nikita the eighty rubles a year such a man was worth, but only about forty, which he gave him haphazard, in small sums, and even that mostly not in cash but in goods from his own shop and at high prices.

Nikita's wife Martha, who had once been a handsome vigorous woman, managed the homestead with the help of her son and two daughters, and did not urge Nikita to live at home: first because she had been living for some twenty years already with a cooper, a peasant from another village who lodged in their house; and secondly because though she managed her husband as she pleased when he was sober, she feared him like fire when he was drunk....