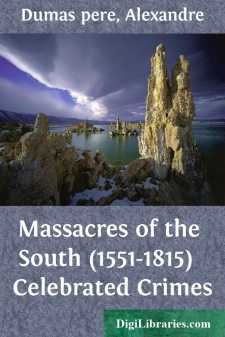 It is possible that our reader, whose recollections may perhaps go back as far as the Restoration, will be surprised at the size of the frame required for the picture we are about to bring before him, embracing as it does two centuries and a half; but as everything, has its precedent, every river its source, every volcano its central fire, so it is that the spot of earth on which we are going to fix our eyes has been the scene of action and reaction, revenge and retaliation, till the religious annals of the South resemble an account-book kept by double entry, in which fanaticism enters the profits of death, one side being written with the blood of Catholics, the other with that of Protestants.

In the great political and religious convulsions of the South, the earthquake-like throes of which were felt even in the capital, Nimes has always taken the central place; Nimes will therefore be the pivot round which our story will revolve, and though we may sometimes leave it for a moment, we shall always return thither without fail.

Nimes was reunited to France by Louis VIII, the government being taken from its vicomte, Bernard Athon VI, and given to consuls in the year 1207. During the episcopate of Michel Briconnet the relics of St. Bauzile were discovered, and hardly were the rejoicings over this event at an end when the new doctrines began to spread over France. It was in the South that the persecutions began, and in 1551 several persons were publicly burnt as heretics by order of the Seneschal's Court at Nimes, amongst whom was Maurice Secenat, a missionary from the Cevennes, who was taken in the very act of preaching. Thenceforth Nimes rejoiced in two martyrs and two patron saints, one revered by the Catholics, and one by the Protestants; St. Bauzile, after reigning as sole protector for twenty-four years, being forced to share the honours of his guardianship with his new rival.

Maurice Secenat was followed as preacher by Pierre de Lavau; these two names being still remembered among the crowd of obscure and forgotten martyrs. He also was put to death on the Place de la Salamandre, all the difference being that the former was burnt and the latter hanged.

Pierre de Lavau was attended in his last moments by Dominique Deyron, Doctor of Theology; but instead of, as is usual, the dying man being converted by the priest, it was the priest who was converted by de Lavau, and the teaching which it was desired should be suppressed burst forth again. Decrees were issued against Dominique Deyron; he was pursued and tracked down, and only escaped the gibbet by fleeing to the mountains.

Persecution and proselytism kept pace with each other, but the blood that was shed produced the usual effect: it rendered the soil on which it fell fruitful, and after two or three years of struggle, during which two or three hundred Huguenots had been burnt or hanged, Nimes awoke one morning with a Protestant majority....