Mary's Meadow And Other Tales of Fields and Flowers 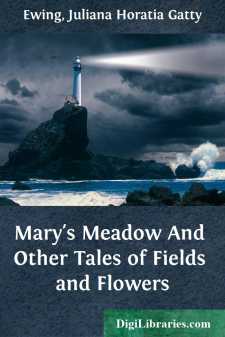 "Mary's Meadow" first appeared in the numbers of Aunt Judy's Magazine from November 1883 to March 1884. It was the last serial story which Mrs. Ewing wrote, and I believe the subject of it arose from the fact that in 1883, after having spent several years in moving from place to place, she went to live at Villa Ponente, Taunton, where she had a settled home with a garden, and was able to revert to the practical cultivation of flowers, which had been one of the favourite pursuits of her girlhood.

The Game of the Earthly Paradise was received with great delight by the readers of the story; one family of children adopted the word "Mary-meadowing" to describe the work which they did towards beautifying hedges and bare places; and my sister received many letters of inquiry about the various plants mentioned in her tale. These she answered in the correspondence columns of the Magazine, and in July 1884 it was suggested that a "Parkinson Society" should be formed, whose objects were "to search out and cultivate old garden flowers which have become scarce; to exchange seeds and plants; to plant waste places with hardy flowers; to circulate books on gardening amongst the Members;" and further, "to try to prevent the extermination of rare wild flowers, as well as of garden treasures."

Reports of the Society, with correspondence on the exchanges of plants and books, and quaint local names of flowers, were given in the Magazine until it was brought to a close after Mrs. Ewing's death; but I am glad to say that the Society existed for some years under the management of the founder, Miss Alice Sargant, and when she was obliged to relinquish the work it was merged in the "Selborne Society," which aims at the preservation of rare species of animals as well as plants.

The "Letters from a Little Garden" were published in Aunt Judy's Magazine between November 1884 and February 1885, and as they, as well as "Mary's Meadow," were due to the interest which my sister was taking in the tending of her own Earthly Paradise,—they are inserted in this volume, although they were left unfinished when the writer was called away to be

"Fast in Thy Paradise, where no flower can wither!"

NOTE.—If any readers of "Mary's Meadow" have been as completely puzzled as the writer was by the title of John Parkinson's old book, it may interest them to know that the question has been raised and answered in Notes and Queries.

I first saw the Paradisi in sole Paradisus terrestris at Kew, some years ago, and was much bewitched by its quaint charm. I grieve to say that I do not possess it; but an old friend and florist—the Rev. H.T. Ellacombe—was good enough to lend me his copy for reference, and to him I wrote for the meaning of the title. But his scholarship, and that of other learned friends, was quite at fault. My old friend's youthful energies (he will permit me to say that he is ninety-four) were not satisfied to rust in ignorance, and he wrote to Notes and Queries on the subject, and has been twice answered....