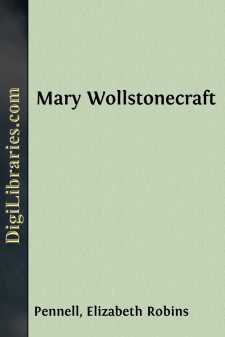 Few women have worked so faithfully for the cause of humanity as Mary Wollstonecraft, and few have been the objects of such bitter censure. She devoted herself to the relief of her suffering fellow-beings with the ardor of a Saint Vincent de Paul, and in return she was considered by them a moral scourge of God. Because she had the courage to express opinions new to her generation, and the independence to live according to her own standard of right and wrong, she was denounced as another Messalina. The young were bidden not to read her books, and the more mature warned not to follow her example, the miseries she endured being declared the just retribution of her actions. Indeed, the infamy attached to her name is almost incredible in the present age, when new theories are more patiently criticised, and when purity of motive has been accepted as the vindication of at least one well-known breach of social laws. The malignant attacks made upon her character since her death have been too great to be ignored. They had best be stated here, that the life which follows may serve as their refutation.

As a rule, the notices which were published after she was dead were harsher and more uncompromising than those written during her lifetime. There were happily one or two exceptions. The writer of her obituary notice in the “Monthly Magazine” for September, 1797, speaks of her in terms of unlimited admiration.

“This extraordinary woman,” he writes, “no less distinguished by admirable talents and a masculine tone of understanding, than by active humanity, exquisite sensibility, and endearing qualities of heart, commanding the respect and winning the affections of all who were favored with her friendship or confidence, or who were within the sphere of her influence, may justly be considered as a public loss. Quick to feel, and indignant to resist, the iron hand of despotism, whether civil or intellectual, her exertions to awaken in the minds of her oppressed sex a sense of their degradation, and to restore them to the dignity of reason and virtue, were active and incessant; by her impassioned reasoning and glowing eloquence, the fabric of voluptuous prejudice has been shaken to its foundation and totters towards its fall; while her philosophic mind, taking a wider range, perceived and lamented in the defects of civil institutions interwoven in their texture and inseparable from them the causes of those partial evils, destructive to virtue and happiness, which poison social intercourse and deform domestic life.” Her eulogist concludes by calling her the “ornament of her sex, the enlightened advocate for freedom, and the benevolent friend of humankind.”

It is more than probable, however, that this was written by a personal friend; for a year later the same   magazine, in its semi-annual retrospect of British literature, expressed somewhat altered opinions. This time it says: “It is not for us to vindicate Mary Godwin from the charge of multiplied immorality which is brought against her by the candid as well as the censorious, by the sagacious as well as the superstitious observer. Her character in our estimation is far from being entitled to unqualified praise; she had many faults; she had many transcendent virtues. But she is now dead, and we shall

‘No farther seek her merits to disclose,Or draw her frailties from the dread abode;There they alike in trembling hope repose,The bosom of her father and her God!’”

The notice in the “Gentleman’s Magazine” for October, 1797, the month after her death, is friendly, but there are limitations to its praise. The following is the sentence it passed upon her: “Her manners were gentle, easy, and elegant; her conversation intelligent and amusing, without the least trait of literary pride, or the apparent consciousness of powers above the level of her sex; and, for fondness of understanding and sensibility of heart, she was, perhaps, never equalled. Her practical skill in education was ever superior to her speculations upon that subject; nor is it possible to express the misfortune sustained in that respect by her children....