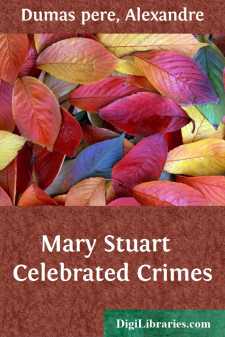 Some royal names are predestined to misfortune: in France, there is the name "Henry". Henry I was poisoned, Henry II was killed in a tournament, Henry III and Henry IV were assassinated. As to Henry V, for whom the past is so fatal already, God alone knows what the future has in store for him.

In Scotland, the unlucky name is "Stuart". Robert I, founder of the race, died at twenty-eight of a lingering illness. Robert II, the most fortunate of the family, was obliged to pass a part of his life, not merely in retirement, but also in the dark, on account of inflammation of the eyes, which made them blood-red. Robert III succumbed to grief, the death of one son and the captivity of other. James I was stabbed by Graham in the abbey of the Black Monks of Perth. James II was killed at the siege of Roxburgh, by a splinter from a burst cannon. James III was assassinated by an unknown hand in a mill, where he had taken refuge during the battle of Sauchie. James IV, wounded by two arrows and a blow from a halberd, fell amidst his nobles on the battlefield of Flodden. James V died of grief at the loss of his two sons, and of remorse for the execution of Hamilton. James VI, destined to unite on his head the two crowns of Scotland and England, son of a father who had been assassinated, led a melancholy and timorous existence, between the scaffold of his mother, Mary Stuart, and that of his son, Charles I. Charles II spent a portion of his life in exile. James II died in it. The Chevalier Saint-George, after having been proclaimed King of Scotland as James VIII, and of England and Ireland as James III, was forced to flee, without having been able to give his arms even the lustre of a defeat. His son, Charles Edward, after the skirmish at Derby and the battle of Culloden, hunted from mountain to mountain, pursued from rock to rock, swimming from shore to shore, picked up half naked by a French vessel, betook himself to Florence to die there, without the European courts having ever consented to recognise him as a sovereign. Finally, his brother, Henry Benedict, the last heir of the Stuarts, having lived on a pension of three thousand pounds sterling, granted him by George III, died completely forgotten, bequeathing to the House of Hanover all the crown jewels which James II had carried off when he passed over to the Continent in 1688—a tardy but complete recognition of the legitimacy of the family which had succeeded his.

In the midst of this unlucky race, Mary Stuart was the favourite of misfortune. As Brantome has said of her, "Whoever desires to write about this illustrious queen of Scotland has, in her, two very, large subjects, the one her life, the other her death," Brantome had known her on one of the most mournful occasions of her life—at the moment when she was quitting France for Scotland.

It was on the 9th of August, 1561, after having lost her mother and her husband in the same year, that Mary Stuart, Dowager of France and Queen of Scotland at nineteen, escorted by her uncles, Cardinals Guise and Lorraine, by the Duke and Duchess of Guise, by the Duc d'Aumale and M....