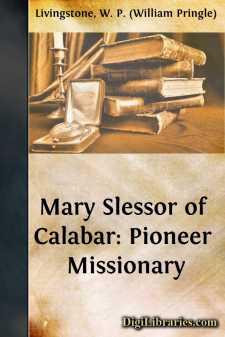 I. SAVED BY FEAR

When the founding of the Calabar Mission on the West Coast of Africa was creating a stir throughout Scotland, there came into a lowly home in Aberdeen a life that was to be known far and wide in connection with the enterprise. On December 2, 1848, Mary Mitchell Slessor was born in Gilcomston, a suburb of the city.

Her father, Robert Slessor, belonged to Buchan, and was a shoemaker. Her mother, who came from Old Meldrum, was an only child, and had been brought up in a home of refinement and piety. She is described by those who knew her as a sweet-faced woman, patient, gentle, and retiring, with a deeply religious disposition, but without any special feature of character, such as one would have expected to find in the mother of so uncommon a daughter. It was from her, however, that Mary got her soft voice and loving heart.

Mary was the second of seven children. Of her infancy and girlhood little is known. Her own earliest recollections were associated with the name of Calabar. Mrs. Slessor was a member of Belmont Street United Presbyterian Church, and was deeply interested in the adventure going forward in that foreign field. "I had," said Mary, "my missionary enthusiasm for Calabar in particular from her—she knew from its inception all that was to be known of its history." Both she and her elder brother Robert heard much talk of it in the home, and the latter used to announce that he was going to be a missionary when he was a man. So great a career was, of course, out of the reach of girls, but he consoled Mary by promising to take her with him into the pulpit. Often Mary played at keeping school; and it is interesting to note that the imaginary scholars she taught and admonished were always black. Robert did not survive these years, and Mary became the eldest.

Dark days came. Mr. Slessor unhappily drifted into habits of intemperance and lost his situation, and when he suggested removing to Dundee, then coming to the front as an industrial town and promising opportunities for the employment of young people, his wife consented, although it was hard for her to part from old friends and associations. But she hoped that in a strange city, where the past was unknown, her husband might begin life afresh and succeed. The family went south in 1859, and entered on a period of struggle and hardship. The money realised by the sale of the furniture melted away, and the new house was bare and comfortless, Mr. Slessor continued his occupation as a shoemaker, and then became a labourer in one of the mills.

The youngest child, Janie, was born in Dundee. All the family were delicate, and it was not long before Mary was left with only two sisters and a brother—Susan, John, and Janie. Mrs. Slessor's fragility prevented her battling successfully with trial and misfortune, but no children could have been trained with more scrupulous care. "I owe a great debt of gratitude to my sainted mother," said Mary, long afterwards. Especially was she solicitous for their religious well- being....