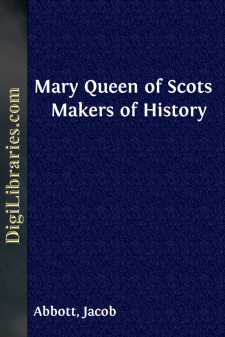 Travelers who go into Scotland take a great interest in visiting, among other places, a certain room in the ruins of an old palace, where Queen Mary was born. Queen Mary was very beautiful, but she was very unfortunate and unhappy. Every body takes a strong interest in her story, and this interest attaches, in some degree, to the room where her sad and sorrowful life was begun.

Palace where Mary was born.Its situation.

The palace is near a little village called Linlithgow. The village has but one long street, which consists of ancient stone houses. North of it is a little lake, or rather pond: they call it, in Scotland, a loch. The palace is between the village and the loch; it is upon a beautiful swell of land which projects out into the water. There is a very small island in the middle of the loch and the shores are bordered with fertile fields. The palace, when entire, was square, with an open space or court in the center. There was a beautiful stone fountain in the center of this court, and an arched gateway through which horsemen and carriages could ride in. The doors of entrance into the palace were on the inside of the court.

The palace is now in ruins. A troop of soldiers came to it one day in time of war, after Mary and her mother had left it, and spent the night there: they spread straw over the floors to sleep upon. In the morning, when they went away, they wantonly set the straw on fire, and left it burning, and thus the palace was destroyed. Some of the lower floors were of stone; but all the upper floors and the roof were burned, and all the wood-work of the rooms, and the doors and window-frames. Since then the palace has never been repaired, but remains a melancholy pile of ruins.

The room where Mary was born had a stone floor. The rubbish which has fallen from above has covered it with a sort of soil, and grass and weeds grow up all over it. It is a very melancholy sight to see. The visitors who go into the room walk mournfully about, trying to imagine how Queen Mary looked, as an infant in her mother's arms, and reflecting on the recklessness of the soldiers in wantonly destroying so beautiful a palace. Then they go to the window, or, rather, to the crumbling opening in the wall where the window once was, and look out upon the loch, now so deserted and lonely; over their heads it is all open to the sky.

Mary's father in the wars.His death.

Mary's father was King of Scotland. At the time that Mary was born, he was away from home engaged in war with the King of England, who had invaded Scotland. In the battles Mary's father was defeated, and he thought that the generals and nobles who commanded his army allowed the English to conquer them on purpose to betray him. This thought overwhelmed him with vexation and anguish. He pined away under the acuteness of his sufferings, and just after the news came to him that his daughter Mary was born, he died. Thus Mary became an orphan, and her troubles commenced, at the very beginning of her days....