Mary Louise in the Country 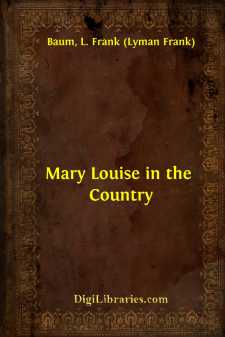 "Is this the station, Gran'pa Jim?" inquired a young girl, as the train began to slow up.

"It does look very promising, does it?" she continued, glancing eagerly out of the window.

"The station? No, my dear; but the station isn't Cragg's Crossing, you know; it is merely the nearest railway point to our new home."

The conductor opened their drawing-room door.

"The next stop is Chargrove, Colonel," he said.

The porter came for their hand baggage and a moment later the long train stopped and the vestibule steps were let down.

If you will refer to the time-table of the D. R. & G. Railway you will find that the station of Chargrove is marked with a character dagger (), meaning that trains stop there only to let off passengers or, when properly signaled, to let them on. Mary Louise, during the journey, had noted this fact with misgivings that were by no means relieved when she stepped from the sumptuous train and found before her merely a shed-like structure, open on all sides, that served as station-house.

Colonel Hathaway and his granddaughter stood silently upon the platform of this shed, their luggage beside them, and watched their trunks tumbled out of the baggage car ahead and the train start, gather speed, and go rumbling on its way. Then the girl looked around her to discover that the primitive station was really the only barren spot in the landscape.

For this was no Western prairie country, but one of the oldest settled and most prosperous sections of a great state that had been one of the original thirteen to be represented by a star on our national banner. Chargrove might not be much of a railway station, as it was only eleven miles from a big city, but the country around it was exceedingly beautiful. Great oaks and maples stood here and there, some in groups and some in stately solitude; the land was well fenced and carefully cultivated; roads—smooth or rutty—led in every direction; flocks and herds were abundant; half hidden by hills or splendid groves peeped the roofs of comfortable farmhouses that evidenced the general prosperity of the community.

"Uncle Eben is late, isn't he, Gran'pa Jim?" asked the girl, as her eyes wandered over the pretty, peaceful scene.

"Our train was exactly on time," he remarked, "which is more than can be said for old Eben. But I think, Mary Louise, I now see an automobile coming along the road. If I am right, we have not long to wait."

He proved to be right, for presently a small touring car came bumping across the tracks and halted at the end of the platform on which they stood. It was driven by an old colored man whose hair was snow white but who sprang from his seat with the agility of a boy when Mary Louise rushed forward with words of greeting.

"My, Uncle Ebe, but it's good to see you again!" she exclaimed, taking both his dusky hands in her own and shaking them cordially....