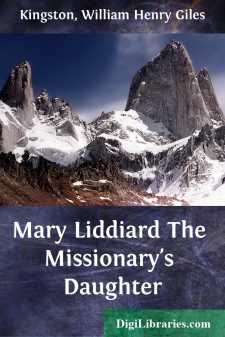 A Missionary Station in an island of the Pacific described.—The girls’ school superintended by Mrs Liddiard, her daughter Mary, and Little Maud.—Mary Liddiard’s narrative.—Introduce to my readers Lisele, the chief’s daughter, one of our pupils.—My mother explains the Gospel to her.

These words were ascending from the lips of a number of dark skinned girls assembled round a fair haired English lady in a building thickly thatched with the leaves of the sugar cane, beneath the shade of a grove of tall cocoanut trees, in one of the many far off beautiful islands of the wide Pacific. The building, erected by the natives after their own fashion, was the school-house of a missionary station lately established by Mr Liddiard, and the lady was his devoted wife. It stood upon a platform of coral-stone, raised about two feet from the ground, while the roof projected a considerable distance beyond the walls, and was supported by stout posts formed of the bread-fruit tree, tightly bound to the rafters by ropes of sinnet.

After the conclusion of the hymn of praise—a sound unwonted in that long benighted region, whose groves had hitherto echoed only with the shouts and wild laughter of the savage heathens, as they performed their barbarous rites, and the shrieks and groans of their victims—the pupils grouped themselves round Mrs Liddiard on the mats with which the floor was spread.

They were of various ages; some were children, others full grown young women. All kept their eyes fixed on her attentively, as if anxious to understand every word she said. Some were clothed in light cotton dresses, their black hair neatly braided and ornamented with a few sweet scented wild flowers, while others were habited in garments of native cloth, formed from the paper mulberry tree.

By the side of Mrs Liddiard sat, on low stools, two young girls, whose light complexions contrasted with that of their dark skinned sisters. Though she spoke in the native language, the two English girls understood her perfectly, and appeared to be as attentive as their companions, and anxious to set a good example to the rest. One of them, with black hair, called little Maud, who seemed to be about eleven years old, had a grave expression of countenance; the other, Mrs Liddiard’s daughter Mary, was very like her mother, with light hair and blue eyes, full of animation and intelligence.

On one side of the house the ground sloped away down to a beach seen between the Pandanus and cocoanut trees, of fine white sand fringing a calm lagoon of the deepest blue, beyond which appeared a long line of foaming breakers, ever dashing against a coral reef, which extended parallel with the coast as far as the eye could reach. On the other side rose the steep sides of a range of rocky and picturesque mountains, clothed to their summits with the richest and densest foliage, numberless creepers climbing up the trees, and hanging from branch to branch, while here and there, amid openings of the forest, several sparkling cascades came rushing down from the far off heights, now falling in sheets of glittering foam, now dashing from ledge to ledge, and at length making their way into the lagoon....