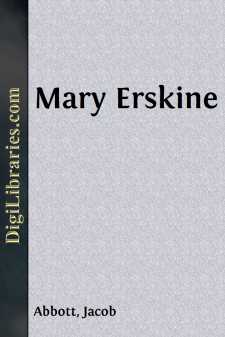 Malleville and her cousin Phonny generally played together at Franconia a great part of the day, and at night they slept in two separate recesses which opened out of the same room. These recesses were deep and large, and they were divided from the room by curtains, so that they formed as it were separate chambers: and yet the children could speak to each other from them in the morning before they got up, since the curtains did not intercept the sound of their voices. They might have talked in the same manner at night, after they had gone to bed, but this was against Mrs. Henry's rules.

One morning Malleville, after lying awake a few minutes, listening to the birds that were singing in the yard, and wishing that the window was open so that she could hear them more distinctly, heard Phonny's voice calling to her.

It was indeed a cold morning, or at least a very cool one. This was somewhat remarkable, as it was in the month of June. But the country about Franconia was cold in winter, and cool in summer. Phonny and Malleville rose and dressed themselves, and then went down stairs. They hoped to find a fire in the sitting-room, but there was none.

"Yes," said Malleville; "it is the oven; they are going to bake."

The back of the oven was so near to the partition wall which formed one side of the sitting-room, that the sound of the fire could be heard through it. The mouth of the oven however opened into another small room connected with the kitchen, which was called the baking-room. The children went out into the baking-room, to warm themselves by the oven fire.

"I am very glad that it is a cool day," said Phonny, "for perhaps mother will let us go to Mary Erskine's. Should not you like to go?"

The readers who have perused the preceding volumes of this series will have observed that Mary Bell, who lived with her mother in the pleasant little farm-house at a short distance from the village, was always called by her full name, Mary Bell, and not ever, or scarcely ever, merely Mary. People had acquired the habit of speaking of her in this way, in order to distinguish her from another Mary who lived with Mrs. Bell for several years. This other Mary was Mary Erskine. Mary Erskine did not live now at Mrs. Bell's, but at another house which was situated nearly two miles from Mrs. Henry's, and the way to it was by a very wild and unfrequented road. The children were frequently accustomed to go and make Mary Erskine a visit; but it was so long a walk that Mrs. Henry never allowed them to go unless on a very cool day.

At breakfast that morning Phonny asked his mother if that would not be a good day for them to go and see Mary Erskine. Mrs. Henry said that it would be an excellent day, and that she should be very glad to have them go, for there were some things there to be brought home. Besides Beechnut was going to mill, and he could carry them as far as Kater's corner.

Kater's corner was a place where a sort of cart path, branching off from the main road, led through the woods to the house where Mary Erskine lived. It took its name from a farmer, whose name was Kater, and whose house was at the corner where the roads diverged. The main road itself was very rough and wild, and the cart path which led from the corner was almost impassable in summer, even for a wagon, though it was a very romantic and beautiful road for travelers on horseback or on foot....