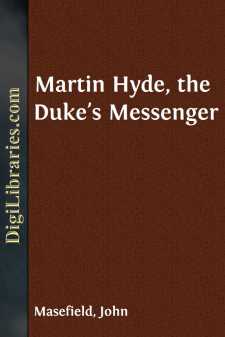 CHAPTER I. I LEAVE HOME

I was born at Oulton, in Suffolk, in the year 1672. I know not the day of my birth, but it was in March, a day or two after the Dutch war began. I know this, because my father, who was the clergyman at Oulton, once told me that in the night of my birth a horseman called upon him, at the rectory, to ask the way to Lowestoft. He was riding from London with letters for the Admiral, he said; but had missed his way somewhere beyond Beccles. He was mud from head to foot (it had been a wet March) but he would not stay to dry himself. He reined in at the door, just as I was born, as though he were some ghost, bringing my life in his saddle bags. Then he shook up his horse, through the mud, towards Lowestoft, so that the splashing of the horse's hoofs must have been the first sound heard by me. The Admiral was gone when he reached Lowestoft, poor man, so all his trouble was wasted. War wastes more energy, I suppose, than any other form of folly. I know that on the East Coast, during all the years of my childhood, this Dutch war wasted the energies of thousands. The villages had to drill men, each village according to its size, to make an army in case the Dutch should land. Long after the war was over, they drilled thus. I remember them on the field outside the church, drilling after Sunday service, firing at a stump of a tree. Once some wag rang the alarm-bell at night, to fetch them out of their beds. Then there were the smugglers; they, too, were caused by the war. After the fighting there was a bitter feeling against the Dutch. Dutch goods were taxed heavily (spice, I remember, was made very dear thus) to pay for the war. The smugglers began then to land their goods secretly, all along the coast, so that they might avoid the payment of the duty. The farmers were their friends; for they liked to have their gin cheap. Indeed, they used to say that in an agueish place like the fens, gin was a necessity, if one would avoid fever. Often, at night, in the winter, when I was walking home from Lowestoft school, I would see the farmers riding to the rendezvous in the dark, with their horses' hoofs all wrapped up in sacks, to make no noise.

I lived for twelve years at Oulton. I learned how to handle a boat there, how to swim, how to skate, how to find the eggs of the many wild fowl in the reeds. In those days the Broad country was a very wild land, half of it swamp. My father gave me a coracle on my tenth birthday. In this little boat I used to explore the country for many miles, pushing up creeks among the reeds, then watching, in the pools (far out of the world it seemed) for ruffs or wild duck. I was a hardy boy, much older than my years, like so many only children. I used to go away, sometimes, for two or three days together, with my friend John Halmer, Captain Halmer's son, taking some bread, with a blanket or two, as my ship's stores. We used to paddle far up the Waveney to an island hidden in reeds. We were the only persons who knew of that island. We were like little kings there....