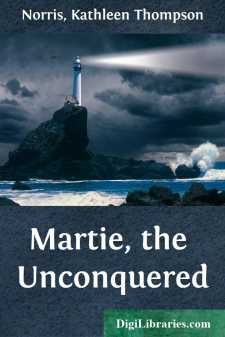 At about four o'clock on a windy, warm September afternoon, four girls came out of the post-office of Monroe, California. They had loitered on their way in, consciously wasting time; they had spent fifteen minutes in the dark and dirty room upon an absolutely unnecessary errand, and now they sauntered forth into the village street keenly aware that the afternoon was not yet waning, and disheartened by the slow passage of time. At five they would go to Bonestell's drug store, and sit in a row at the soda counter, and drink effervescent waters pleasingly mingled with fruit syrups and an inferior quality of ice cream. Five o'clock was the hour for "sodas," neither half-past four nor half-past five was at all the same thing in the eyes of Monroe's young people. After that they would wander idly toward the bridge, and separate; Grace Hawkes turning toward the sunset for another quarter of a mile, Rose Ransome opening the garden gate of the pretty, vine-covered cottage near the bridge, and the Monroe girls, Sarah and Martha, in a desperate hurry now, flying up the twilight quiet of North Main Street to the long picket fence, the dark, tree-shaded garden, and the shabby side-doorway of the old Monroe house.

Three of these girls met almost every afternoon, going first to each other's houses, and later wandering down for the mail, for some trivial errand at drug store or dry-goods store, and for the inevitable ices. Rose Ransome was not often with them, for Rose was just a little superior in several ways to her present companions, and frequently spent the afternoon practising on her violin, or driving, or walking with the Parker girls and Florence Frost, who hardly recognized the existence of Grace Hawkes and the Monroes. The one bank in Monroe was the Frost and Parker Bank; there were Frost Street and Parker Street, the Frost Building and the Parker Building. May and Ida Parker and Florence Frost had gone to Miss Bell's Private School when they were little, and then to Miss Spencer's School in New York.

But even all this might not have accounted for the exclusive social instincts of the young ladies if both families had not been very rich. As it was, with prosperous fathers and ambitious mothers, with well-kept, old-fashioned homes, pews in church, allowances of so many hundred dollars a year, horses to ride and drive, and servants to wait upon them, the three daughters of these two prominent families considered themselves as obviously better than their neighbours, and bore themselves accordingly. Cyrus Frost and Graham Parker had come to California as young men, in the seventies; had cast in their lot with little Monroe, and had grown rich with the town. It was a credit to the state now; they had found it a mere handful of settlers' cabins, with one stately, absurd mansion standing out among them, in a plantation of young pepper and willow and locust and eucalyptus trees.

This was the home of Malcolm Monroe, turreted, mansarded, generously filled with the glass windows that had come in a sailing vessel around the Horn....