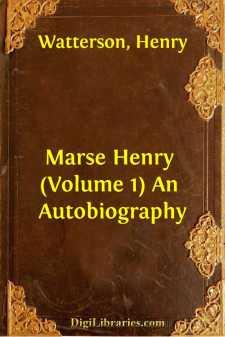 I Am Born and Begin to Take Notice—John Quincy Adams and Andrew    Jackson—James K. Polk and Franklin Pierce—Jack Dade and "Beau    Hickman"—Old Times in Washington

I am asked to jot down a few autobiographic odds and ends from such data of record and memory as I may retain. I have been something of a student of life; an observer of men and women and affairs; an appraiser of their character, their conduct, and, on occasion, of their motives. Thus, a kind of instinct, which bred a tendency and grew to a habit, has led me into many and diverse companies, the lowest not always the meanest.

Circumstance has rather favored than hindered this bent. I was born in a party camp and grew to manhood on a political battlefield. I have lived through stirring times and in the thick of events. In a vein colloquial and reminiscential, not ambitious, let me recall some impressions which these have left upon the mind of one who long ago reached and turned the corner of the Scriptural limitation; who, approaching fourscore, does not yet feel painfully the frost of age beneath the ravage of time's defacing waves. Assuredly they have not obliterated his sense either of vision or vista. Mindful of the adjuration of Burns,

Keep something to yourself,  Ye scarcely tell to ony,

I shall yet hold little in reserve, having no state secrets or mysteries of the soul to reveal.

It is not my purpose to be or to seem oracular. I shall not write after the manner of Rousseau, whose Confessions had been better honored in the breach than the observance, and in any event whose sincerity will bear question; nor have I tales to tell after the manner of Paul Barras, whose Memoirs have earned him an immortality of infamy. Neither shall I emulate the grandiose volubility and self-complacent posing of Metternich and Talleyrand, whose pretentious volumes rest for the most part unopened upon dusty shelves. I aspire to none of the honors of the historian. It shall be my aim as far as may be to avoid the garrulity of the raconteur and to restrain the exaggerations of the ego. But neither fear of the charge of self-exploitation nor the specter of a modesty oft too obtrusive to be real shall deter me from a proper freedom of narration, where, though in the main but a humble chronicler, I must needs appear upon the scene and speak of myself; for I at least have not always been a dummy and have sometimes in a way helped to make history.

In my early life—as it were, my salad days—I aspired to becoming what old Simon Cameron called "one of those damned literary fellows" and Thomas Carlyle less profanely described as "a leeterary celeebrity." But some malign fate always sat upon my ambitions in this regard. It was easy to become The National Gambler in Nast's cartoons, and yet easier The National Drunkard through the medium of the everlasting mint-julep joke; but the phantom of the laurel crown would never linger upon my fair young brow.

Though I wrote verses for the early issues of Harper's Weekly—happily no one can now prove them on me, for even at that jejune period I had the prudence to use an anonym—the Harpers, luckily for me, declined to publish a volume of my poems....