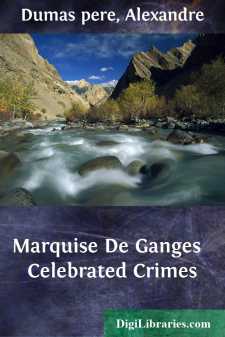 Toward the close of the year 1657, a very plain carriage, with no arms painted on it, stopped, about eight o'clock one evening, before the door of a house in the rue Hautefeuille, at which two other coaches were already standing. A lackey at once got down to open the carriage door; but a sweet, though rather tremulous voice stopped him, saying, "Wait, while I see whether this is the place."

Then a head, muffled so closely in a black satin mantle that no feature could be distinguished, was thrust from one of the carriage windows, and looking around, seemed to seek for some decisive sign on the house front. The unknown lady appeared to be satisfied by her inspection, for she turned back to her companion.

As a result of this certainty, the carriage door was opened, the two women alighted, and after having once more raised their eyes to a strip of wood, some six or eight feet long by two broad, which was nailed above the windows of the second storey, and bore the inscription, "Madame Voison, midwife," stole quickly into a passage, the door of which was unfastened, and in which there was just so much light as enabled persons passing in or out to find their way along the narrow winding stair that led from the ground floor to the fifth story.

The two strangers, one of whom appeared to be of far higher rank than the other, did not stop, as might have been expected, at the door corresponding with the inscription that had guided them, but, on the contrary, went on to the next floor.

Here, upon the landing, was a kind of dwarf, oddly dressed after the fashion of sixteenth-century Venetian buffoons, who, when he saw the two women coming, stretched out a wand, as though to prevent them from going farther, and asked what they wanted.

"To consult the spirit," replied the woman of the sweet and tremulous voice.

"Come in and wait," returned the dwarf, lifting a panel of tapestry and ushering the two women into a waiting-room.

The women obeyed, and remained for about half an hour, seeing and hearing nothing. At last a door, concealed by the tapestry, was suddenly opened; a voice uttered the word "Enter," and the two women were introduced into a second room, hung with black, and lighted solely by a three-branched lamp that hung from the ceiling. The door closed behind them, and the clients found themselves face to face with the sibyl.

She was a woman of about twenty-five or twenty-six, who, unlike other women, evidently desired to appear older than she was. She was dressed in black; her hair hung in plaits; her neck, arms, and feet were bare; the belt at her waist was clasped by a large garnet which threw out sombre fires. In her hand she held a wand, and she was raised on a sort of platform which stood for the tripod of the ancients, and from which came acrid and penetrating fumes; she was, moreover, fairly handsome, although her features were common, the eyes only excepted, and these, by some trick of the toilet, no doubt, looked inordinately large, and, like the garnet in her belt, emitted strange lights.

When the two visitors came in, they found the soothsayer leaning her forehead on her hand, as though absorbed in thought. Fearing to rouse her from her ecstasy, they waited in silence until it should please her to change her position. At the end of ten minutes she raised her head, and seemed only now to become aware that two persons were standing before her....