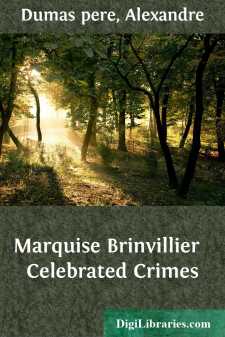 Towards the end of the year 1665, on a fine autumn evening, there was a considerable crowd assembled on the Pont-Neuf where it makes a turn down to the rue Dauphine. The object of this crowd and the centre of attraction was a closely shut, carriage. A police official was trying to force open the door, and two out of the four sergeants who were with him were holding the horses back and the other two stopping the driver, who paid no attention to their commands, but only endeavoured to urge his horses to a gallop. The struggle had been going on same time, when suddenly one of the doors violently pushed open, and a young officer in the uniform of a cavalry captain jumped down, shutting the door as he did so though not too quickly for the nearest spectators to perceive a woman sitting at the back of the carriage. She was wrapped in cloak and veil, and judging by the precautions she, had taken to hide her face from every eye, she must have had her reasons for avoiding recognition.

"Sir," said the young man, addressing the officer with a haughty air, "I presume, till I find myself mistaken, that your business is with me alone; so I will ask you to inform me what powers you may have for thus stopping my coach; also, since I have alighted, I desire you to give your men orders to let the vehicle go on."

"First of all," replied the man, by no means intimidated by these lordly airs, but signing to his men that they must not release the coach or the horses, "be so good as to answer my questions."

"I am attending," said the young man, controlling his agitation by a visible effort.

"Are you the Chevalier Gaudin de Sainte-Croix?"

"Captain of the Tracy, regiment?"

"Then I arrest you in the king's name."

"What powers have you?"

Sainte-Croix cast a rapid glance at the paper, and instantly recognised the signature of the minister of police: he then apparently confined his attention to the woman who was still in the carriage; then he returned to his first question.

"This is all very well, sir," he said to the officer, "but this warrant contains no other name than mine, and so you have no right to expose thus to the public gaze the lady with whom I was travelling when you arrested me. I must beg of you to order your assistants to allow this carriage to drive on; then take me where you please, for I am ready to go with you."

To the officer this request seemed a just one: he signed to his men to let the driver and the horses go on; and, they, who had waited only for this, lost no time in breaking through the crowd, which melted away before them; thus the woman escaped for whose safety the prisoner seemed so much concerned.

Sainte-Croix kept his promise and offered no resistance; for some moments he followed the officer, surrounded by a crowd which seemed to have transferred all its curiosity to his account; then, at the corner of the Quai de d'Horloge, a man called up a carriage that had not been observed before, and Sainte-Croix took his place with the same haughty and disdainful air that he had shown throughout the scene we have just described. The officer sat beside him, two of his men got up behind, and the other two, obeying no doubt their master's orders, retired with a parting direction to the driver,

Our readers will now permit us to make them more fully acquainted with the man who is to take the first place in the story. The origin of Gaudin de Sainte-Croix was not known: according to one tale, he was the natural son of a great lord; another account declared that he was the offspring of poor people, but that, disgusted with his obscure birth, he preferred a splendid disgrace, and therefore chose to pass for what he was not. The only certainty is that he was born at Montauban, and in actual rank and position he was captain of the Tracy regiment. At the time when this narrative opens, towards the end of 1665, Sainte-Croix was about twenty-eight or thirty, a fine young man of cheerful and lively appearance, a merry comrade at a banquet, and an excellent captain: he took his pleasure with other men, and was so impressionable a character that he enjoyed a virtuous project as well as any plan for a debauch; in love he was most susceptible, and jealous to the point of madness even about a courtesan, had she once taken his fancy; his prodigality was princely, although he had no income; further, he was most sensitive to slights, as all men are who, because they are placed in an equivocal position, fancy that everyone who makes any reference to their origin is offering an intentional insult....