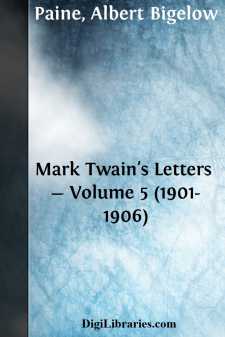 An editorial in the Louisville Courier-Journal, early in 1901, said:"A remarkable transformation, or rather a development, has takenplace in Mark Twain. The genial humorist of the earlier day is nowa reformer of the vigorous kind, a sort of knight errant who doesnot hesitate to break a lance with either Church or State if hethinks them interposing on that broad highway over which he believesnot a part but the whole of mankind has the privilege of passing inthe onward march of the ages."Mark Twain had begun "breaking the lance" very soon after his returnfrom Europe. He did not believe that he could reform the world, butat least he need not withhold his protest against those things whichstirred his wrath. He began by causing the arrest of a cabman whohad not only overcharged but insulted him; he continued by writingopenly against the American policy in the Philippines, themissionary propaganda which had resulted in the Chinese uprising andmassacre, and against Tammany politics. Not all of his efforts werein the line of reform; he had become a sort of general spokesmanwhich the public flocked to hear, whatever the subject. On theoccasion of a Lincoln Birthday service at Carnegie Hall he waschosen to preside, and he was obliged to attend more dinners thanwere good for his health. His letters of this period were mainlywritten to his old friend Twichell, in Hartford. Howells, who livedin New York, he saw with considerable frequency.In the letter which follows the medicine which Twichell was to takewas Plasmon, an English proprietary remedy in which Mark Twain hadinvested—a panacea for all human ills which osteopathy could notreach.

To Rev. Joseph Twichell, in Hartford:

DEAR JOE,—Certainly. I used to take it in my coffee, but it settled to the bottom in the form of mud, and I had to eat it with a spoon; so I dropped the custom and took my 2 teaspoonfuls in cold milk after breakfast. If we were out of milk I shoveled the dry powder into my mouth and washed it down with water. The only essential is to get it down, the method is not important.

No, blame it, I can't go to the Alumni dinner, Joe. It takes two days, and I can't spare the time. Moreover I preside at the Lincoln birthday celebration in Carnegie Hall Feb. 11, and I must not make two speeches so close together. Think of it—two old rebels functioning there—I as President, and Watterson as Orator of the Day! Things have changed somewhat in these 40 years, thank God.

Look here—when you come down you must be our guest—we've got a roomy room for you, and Livy will make trouble if you go elsewhere. Come straight to 14 West 10th.

Jan. 24. Livy says Amen to that; also, can you give us a day or two's notice, so the room will be sure to be vacant?

I'm going to stick close to my desk for a month, now, hoping to write a small book.

Ys EverMARK The letter which follows is a fair sample of Mark Twain's privateviolence on a subject which, in public print, he could only treateffectively by preserving his good humor. When he found itnecessary to boil over, as he did, now and then, for relief, healways found a willing audience in Twichell. The mention of his"Private Philosophy" refers to 'What Is Man?', privately publishedin 1906; reissued by his publishers in 1916.

DEAR JOE,—I'm not expecting anything but kicks for scoffing, and am expecting a diminution of my bread and butter by it, but if Livy will let me I will have my say. This nation is like all the others that have been spewed upon the earth—ready to shout for any cause that will tickle its vanity or fill its pocket. What a hell of a heaven it will be, when they get all these hypocrites assembled there!

I can't understand it! You are a public guide and teacher, Joe, and are under a heavy responsibility to men, young and old; if you teach your people—as you teach me—to hide their opinions when they believe the flag is being abused and dishonored, lest the utterance do them and a publisher a damage, how do you answer for it to your conscience? You are sorry for me; in the fair way of give and take, I am willing to be a little sorry for you.

However, I seem to be going counter to my own Private Philosophy—which Livy won't allow me to publish—because it would destroy me. But I hope to see it in print before I die. I planned it 15 years ago, and wrote it in '98. I've often tried to read it to Livy, but she won't have it; it makes her melancholy. The truth always has that effect on people. Would have, anyway, if they ever got hold of a rag of it—Which they don't....