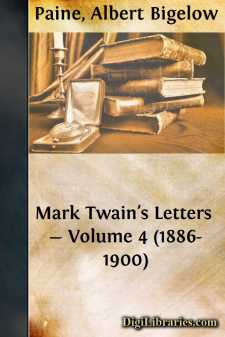 MY DEAR HOWELLS,—The date set for the Prince and Pauper play is ten days hence—Jan. 13. I hope you and Pilla can take a train that arrives here during the day; the one that leaves Boston toward the end of the afternoon would be a trifle late; the performance would have already begun when you reached the house.

Yrs everMARK. Mark Twain's mother was a woman of sturdy character and with a keensense of humor and tender sympathies. Her husband, John MarshallClemens, had been a man of high moral character, honored by all whoknew him, respected and apparently loved by his wife. No one wouldever have supposed that during all her years of marriage, and almostto her death, she carried a secret romance that would only be toldat last in the weary disappointment of old age. It is a curiousstory, and it came to light in this curious way:

MY DEAR HOWELLS,—..... Here's a secret. A most curious and pathetic romance, which has just come to light. Read these things, but don't mention them. Last fall, my old mother—then 82—took a notion to attend a convention of old settlers of the Mississippi Valley in an Iowa town. My brother's wife was astonished; and represented to her the hardships and fatigues of such a trip, and said my mother might possibly not even survive them; and said there could be no possible interest for her in such a meeting and such a crowd. But my mother insisted, and persisted; and finally gained her point. They started; and all the way my mother was young again with excitement, interest, eagerness, anticipation. They reached the town and the hotel. My mother strode with the same eagerness in her eye and her step, to the counter, and said:

"No. He was here, but he returned to St. Louis this morning."

"Will he come again?"

My mother turned away, the fire all gone from her, and said, "Let us go home."

They went straight back to Keokuk. My mother sat silent and thinking for many days—a thing which had never happened before. Then one day she said:

"I will tell you a secret. When I was eighteen, a young medical student named Barrett lived in Columbia (Ky.) eighteen miles away; and he used to ride over to see me. This continued for some time. I loved him with my whole heart, and I knew that he felt the same toward me, though no words had been spoken. He was too bashful to speak—he could not do it. Everybody supposed we were engaged—took it for granted we were—but we were not. By and by there was to be a party in a neighboring town, and he wrote my uncle telling him his feelings, and asking him to drive me over in his buggy and let him (Barrett) drive me back, so that he might have that opportunity to propose. My uncle should have done as he was asked, without explaining anything to me; but instead, he read me the letter; and then, of course, I could not go—and did not....