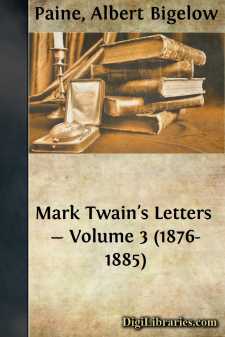 The Monday Evening Club of Hartford was an association of most ofthe literary talent of that city, and it included a number of verydistinguished members. The writers, the editors, the lawyers, andthe ministers of the gospel who composed it were more often than notmen of national or international distinction. There was but onepaper at each meeting, and it was likely to be a paper that wouldlater find its way into some magazine.Naturally Mark Twain was one of its favorite members, and hiscontributions never failed to arouse interest and discussion. A"Mark Twain night" brought out every member. In the next letter wefind the first mention of one of his most memorable contributions—astory of one of life's moral aspects. The tale, now included in hiscollected works, is, for some reason, little read to-day; yet thecurious allegory, so vivid in its seeming reality, is well worthconsideration.

MY DEAR HOWELLS,—Indeed we haven't forgotten the Howellses, nor scored up a grudge of any kind against them; but the fact is I was under the doctor's hands for four weeks on a stretch and have been disabled from working for a week or so beside. I thought I was well, about ten days ago, so I sent for a short-hand writer and dictated answers to a bushel or so of letters that had been accumulating during my illness. Getting everything shipshape and cleared up, I went to work next day upon an Atlantic article, which ought to be worth $20 per page (which is the price they usually pay for my work, I believe) for although it is only 70 pages MS (less than two days work, counting by bulk,) I have spent 3 more days trimming, altering and working at it. I shall put in one more day's polishing on it, and then read it before our Club, which is to meet at our house Monday evening, the 24th inst. I think it will bring out considerable discussion among the gentlemen of the Club—though the title of the article will not give them much notion of what is to follow,—this title being "The Facts Concerning the Recent Carnival of Crime in Connecticut"—which reminds me that today's Tribune says there will be a startling article in the current Atlantic, in which a being which is tangible bud invisible will figure-exactly the case with the sketch of mine which I am talking about! However, mine can lie unpublished a year or two as well as not—though I wish that contributor of yours had not interfered with his coincidence of heroes.

But what I am coming at, is this: won't you and Mrs. Howells come down Saturday the 22nd and remain to the Club on Monday night? We always have a rattling good time at the Club and we do want you to come, ever so much. Will you? Now say you will. Mrs. Clemens and I are persuading ourselves that you twain will come.

My volume of sketches is doing very well, considering the times; received my quarterly statement today from Bliss, by which I perceive that 20,000 copies have been sold—or rather, 20,000 had been sold 3 weeks ago; a lot more, by this time, no doubt.

I am on the sick list again—and was, day before yesterday—but on the whole I am getting along.

Yrs everMARK Howells wrote that he could not come down to the club meeting,adding that sickness was "quite out of character" for Mark Twain,and hardly fair on a man who had made so many other people feelwell. He closed by urging that Bliss "hurry out" 'Tom Sawyer.'"That boy is going to make a prodigious hit." Clemens answered:

MY DEAR HOWELLS,—Thanks, and ever so many, for the good opinion of 'Tom Sawyer.' Williams has made about 300 rattling pictures for it—some of them very dainty. Poor devil, what a genius he has and how he does murder it with rum. He takes a book of mine, and without suggestion from anybody builds no end of pictures just from his reading of it....