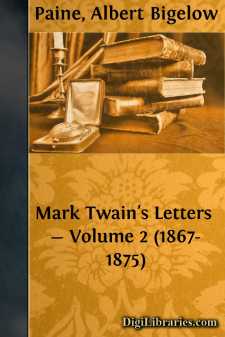 To Bret Harte, in San Francisco:

DEAR BRET,—I take my pen in hand to inform you that I am well and hope these few lines will find you enjoying the same God's blessing.

The book is out, and is handsome. It is full of damnable errors of grammar and deadly inconsistencies of spelling in the Frog sketch because I was away and did not read the proofs; but be a friend and say nothing about these things. When my hurry is over, I will send you an autograph copy to pisen the children with.

I am to lecture in Cooper Institute next Monday night. Pray for me.

We sail for the Holy Land June 8. Try to write me (to this hotel,) and it will be forwarded to Paris, where we remain 10 or 15 days.

Regards and best wishes to Mrs. Bret and the family.

To Mrs. Jane Clemens and family, in St. Louis:

DEAR FOLKS,—Don't expect me to write for a while. My hands are full of business on account of my lecture for the 6th inst., and everything looks shady, at least, if not dark. I have got a good agent—but now after we have hired Cooper Institute and gone to an expense in one way or another of $500, it comes out that I have got to play against Speaker Colfax at Irving Hall, Ristori, and also the double troupe of Japanese jugglers, the latter opening at the great Academy of Music—and with all this against me I have taken the largest house in New York and cannot back water. Let her slide! If nobody else cares I don't.

I'll send the book soon. I am awfully hurried now, but not worried.

Yrs.SAM. The Cooper Union lecture proved a failure, and a success.When it became evident to Fuller that the venture was notgoing to pay, he sent out a flood of complimentaries to theschool-teachers of New York City and the surroundingdistricts. No one seems to have declined them. Clemenslectured to a jammed house and acquired much reputation.Lecture proposals came from several directions, but he couldnot accept them now. He wrote home that he was eighteen Altaletters behind and had refused everything. Thos. Nast, thecartoonist, then in his first fame, propped a joint tour,Clemens to lecture while he, Nast, would illustrate with"lightning" sketches; but even this could not be considerednow. In a little while he would sail, and the days wereoverfull. A letter written a week before he sailed is fullof the hurry and strain of these last days.

To Mrs. Jane Clemens and family, in St. Louis:

DEAR FOLKS,—I know I ought to write oftener (just got your last,) and more fully, but I cannot overcome my repugnance to telling what I am doing or what I expect to do or propose to do. Then, what have I left to write about? Manifestly nothing.

It isn't any use for me to talk about the voyage, because I can have no faith in that voyage till the ship is under way. How do I know she will ever sail? My passage is paid, and if the ship sails, I sail in her—but I make no calculations, have bought no cigars, no sea-going clothing—have made no preparation whatever—shall not pack my trunk till the morning we sail....