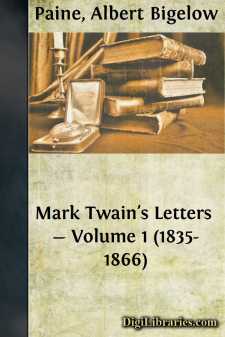 SAMUEL LANGHORNE CLEMENS, for nearly half a century known and celebrated as "Mark Twain," was born in Florida, Missouri, on November 30, 1835. He was one of the foremost American philosophers of his day; he was the world's most famous humorist of any day. During the later years of his life he ranked not only as America's chief man of letters, but likewise as her best known and best loved citizen.

The beginnings of that life were sufficiently unpromising. The family was a good one, of old Virginia and Kentucky stock, but its circumstances were reduced, its environment meager and disheartening. The father, John Marshall Clemens—a lawyer by profession, a merchant by vocation—had brought his household to Florida from Jamestown, Tennessee, somewhat after the manner of judge Hawkins as pictured in The Gilded Age. Florida was a small town then, a mere village of twenty-one houses located on Salt River, but judge Clemens, as he was usually called, optimistic and speculative in his temperament, believed in its future. Salt River would be made navigable; Florida would become a metropolis. He established a small business there, and located his family in the humble frame cottage where, five months later, was born a baby boy to whom they gave the name of Samuel—a family name—and added Langhorne, after an old Virginia friend of his father.

The child was puny, and did not make a very sturdy fight for life. Still he weathered along, season after season, and survived two stronger children, Margaret and Benjamin. By 1839 Judge Clemens had lost faith in Florida. He removed his family to Hannibal, and in this Mississippi River town the little lad whom the world was to know as Mark Twain spent his early life. In Tom Sawyer we have a picture of the Hannibal of those days and the atmosphere of his boyhood there.

His schooling was brief and of a desultory kind. It ended one day in 1847, when his father died and it became necessary that each one should help somewhat in the domestic crisis. His brother Orion, ten years his senior, was already a printer by trade. Pamela, his sister; also considerably older, had acquired music, and now took a few pupils. The little boy Sam, at twelve, was apprenticed to a printer named Ament. His wages consisted of his board and clothes—"more board than clothes," as he once remarked to the writer.

He remained with Ament until his brother Orion bought out a small paper in Hannibal in 1850. The paper, in time, was moved into a part of the Clemens home, and the two brothers ran it, the younger setting most of the type. A still younger brother, Henry, entered the office as an apprentice. The Hannibal journal was no great paper from the beginning, and it did not improve with time. Still, it managed to survive—country papers nearly always manage to survive—year after year, bringing in some sort of return. It was on this paper that young Sam Clemens began his writings—burlesque, as a rule, of local characters and conditions—usually published in his brother's absence; generally resulting in trouble on his return....