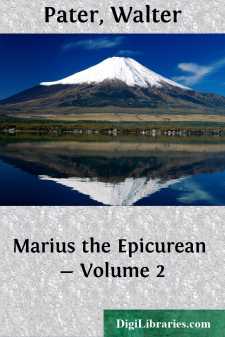 [3] THE very finest flower of the same company—Aurelius with the gilded fasces borne before him, a crowd of exquisites, the empress Faustina herself, and all the elegant blue-stockings of the day, who maintained, people said, their private "sophists" to whisper philosophy into their ears winsomely as they performed the duties of the toilet—was assembled again a few months later, in a different place and for a very different purpose. The temple of Peace, a "modernising" foundation of Hadrian, enlarged by a library and lecture-rooms, had grown into an institution like something between a college and a literary club; and here Cornelius Fronto was to pronounce a discourse on the Nature of Morals. There were some, indeed, who had desired the emperor Aurelius himself to declare his whole mind on this matter. Rhetoric was become almost a function of the state: philosophy was upon the throne; and had from time to time, by [4] request, delivered an official utterance with well-nigh divine authority. And it was as the delegate of this authority, under the full sanction of the philosophic emperor—emperor and pontiff, that the aged Fronto purposed to-day to expound some parts of the Stoic doctrine, with the view of recommending morals to that refined but perhaps prejudiced company, as being, in effect, one mode of comeliness in things—as it were music, or a kind of artistic order, in life. And he did this earnestly, with an outlay of all his science of mind, and that eloquence of which he was known to be a master. For Stoicism was no longer a rude and unkempt thing. Received at court, it had largely decorated itself: it was grown persuasive and insinuating, and sought not only to convince men's intelligence but to allure their souls. Associated with the beautiful old age of the great rhetorician, and his winning voice, it was almost Epicurean. And the old man was at his best on the occasion; the last on which he ever appeared in this way. To-day was his own birthday. Early in the morning the imperial letter of congratulation had reached him; and all the pleasant animation it had caused was in his face, when assisted by his daughter Gratia he took his place on the ivory chair, as president of the Athenaeum of Rome, wearing with a wonderful grace the philosophic pall,—in reality neither more nor less than the loose woollen cloak of the common soldier, but fastened [5] on his right shoulder with a magnificent clasp, the emperor's birthday gift.

It was an age, as abundant evidence shows, whose delight in rhetoric was but one result of a general susceptibility—an age not merely taking pleasure in words, but experiencing a great moral power in them. Fronto's quaintly fashionable audience would have wept, and also assisted with their purses, had his present purpose been, as sometimes happened, the recommendation of an object of charity. As it was, arranging themselves at their ease among the images and flowers, these amateurs of exquisite language, with their tablets open for careful record of felicitous word or phrase, were ready to give themselves wholly to the intellectual treat prepared for them, applauding, blowing loud kisses through the air sometimes, at the speaker's triumphant exit from one of his long, skilfully modulated sentences; while the younger of them meant to imitate everything about him, down to the inflections of his voice and the very folds of his mantle. Certainly there was rhetoric enough:—a wealth of imagery; illustrations from painting, music, mythology, the experiences of love; a management, by which subtle, unexpected meaning was brought out of familiar terms, like flies from morsels of amber, to use Fronto's own figure. But with all its richness, the higher claim of his style was rightly understood to lie in gravity and self-command, and an especial care for the [6] purities of a vocabulary which rejected every expression unsanctioned by the authority of approved ancient models.

And it happened with Marius, as it will sometimes happen, that this general discourse to a general audience had the effect of an utterance adroitly designed for him. His conscience still vibrating painfully under the shock of that scene in the amphitheatre, and full of the ethical charm of Cornelius, he was questioning himself with much impatience as to the possibility of an adjustment between his own elaborately thought-out intellectual scheme and the "old morality." In that intellectual scheme indeed the old morality had so far been allowed no place, as seeming to demand from him the admission of certain first principles such as might misdirect or retard him in his efforts towards a complete, many-sided existence; or distort the revelations of the experience of life; or curtail his natural liberty of heart and mind. But now (his imagination being occupied for the moment with the noble and resolute air, the gallantry, so to call it, which composed the outward mien and presentment of his strange friend's inflexible ethics) he felt already some nascent suspicion of his philosophic programme, in regard, precisely, to the question of good taste. There was the taint of a graceless "antinomianism" perceptible in it, a dissidence, a revolt against accustomed modes, the actual impression of which on other [7] men might rebound upon himself in some loss of that personal pride to which it was part of his theory of life to allow so much. And it was exactly a moral situation such as this that Fronto appeared to be contemplating....