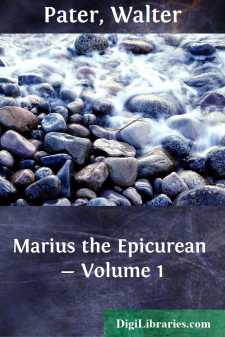 CHAPTER I: "THE RELIGION OF NUMA"

[3] As, in the triumph of Christianity, the old religion lingered latest in the country, and died out at last as but paganism—the religion of the villagers, before the advance of the Christian Church; so, in an earlier century, it was in places remote from town-life that the older and purer forms of paganism itself had survived the longest. While, in Rome, new religions had arisen with bewildering complexity around the dying old one, the earlier and simpler patriarchal religion, "the religion of Numa," as people loved to fancy, lingered on with little change amid the pastoral life, out of the habits and sentiment of which so much of it had grown. Glimpses of such a survival we may catch below the merely artificial attitudes of Latin pastoral poetry; in Tibullus especially, who has preserved for us many poetic details of old Roman religious usage.

[4] —he prays, with unaffected seriousness. Something liturgical, with repetitions of a consecrated form of words, is traceable in one of his elegies, as part of the order of a birthday sacrifice. The hearth, from a spark of which, as one form of old legend related, the child Romulus had been miraculously born, was still indeed an altar; and the worthiest sacrifice to the gods the perfect physical sanity of the young men and women, which the scrupulous ways of that religion of the hearth had tended to maintain. A religion of usages and sentiment rather than of facts and belief, and attached to very definite things and places—the oak of immemorial age, the rock on the heath fashioned by weather as if by some dim human art, the shadowy grove of ilex, passing into which one exclaimed involuntarily, in consecrated phrase, Deity is in this Place! Numen Inest!—it was in natural harmony with the temper of a quiet people amid the spectacle of rural life, like that simpler faith between man and man, which Tibullus expressly connects with the period when, with an inexpensive worship, the old wooden gods had been still pressed for room in their homely little shrines.

And about the time when the dying Antoninus Pius ordered his golden image of Fortune to be carried into the chamber of his successor (now about to test the truth of the old Platonic contention, that the world would at last find itself [5] happy, could it detach some reluctant philosophic student from the more desirable life of celestial contemplation, and compel him to rule it), there was a boy living in an old country-house, half farm, half villa, who, for himself, recruited that body of antique traditions by a spontaneous force of religious veneration such as had originally called them into being. More than a century and a half had past since Tibullus had written; but the restoration of religious usages, and their retention where they still survived, was meantime come to be the fashion through the influence of imperial example; and what had been in the main a matter of family pride with his father, was sustained by a native instinct of devotion in the young Marius....