Margaret of Anjou Makers of History 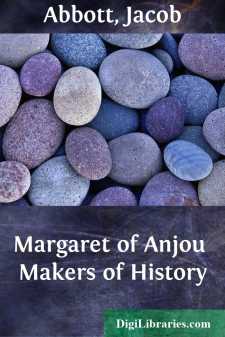 The Houses of York and Lancaster.

Margaret of Anjou was a heroine; not a heroine of romance and fiction, but of stern and terrible reality. Her life was a series of military exploits, attended with dangers, privations, sufferings, and wonderful vicissitudes of fortune, scarcely to be paralleled in the whole history of mankind.

She was born and lived in a period during which there prevailed in the western part of Europe two great and dreadful quarrels, which lasted for more than a hundred years, and which kept France and England, and all the countries contiguous to them, in a state of continual commotion during all that time.

Contest between the houses of York and Lancaster.

The first of these quarrels grew out of a dispute which arose among the various branches of the royal family of England in respect to the succession to the crown. The two principal branches of the family were the descendants respectively of the Dukes of York and Lancaster, and the wars which they waged against each other are called in history the wars of the houses of York and Lancaster. These wars continued for several successive generations, and Margaret of Anjou was the queen of one of the most prominent representatives of the Lancaster line. Thus she became most intimately involved in the quarrel.

The second great contention which prevailed during this period consisted of the wars waged between France and England for the possession of the territory which now forms the northern portion of France. A large portion of that territory, during the reigns that immediately preceded the time of Margaret of Anjou, had belonged to England. But the kings of France were continually attempting to regain possession of it—the English, of course, all the time making desperate resistance. Thus, for a hundred years, including the time while Margaret lived, England was involved in a double set of wars—the one internal, being waged by one branch of the royal family against the other for the possession of the throne, and the other external, being waged against France and other Continental powers for the possession of the towns and castles, and the country dependent upon them, which lay along the southern shore of the English Channel.

In order that the story of Margaret of Anjou may be properly understood, it will be necessary first to give some explanations in respect to the nature of these two quarrels, and to the progress which had been made in them up to the time when Margaret came upon the stage. We shall begin with the internal or civil wars which were waged between the families of York and Lancaster. Some account of the origin and nature of this difficulty is given in our history of Richard III., but it is necessary to allude to it again here, and to state some additional particulars in respect to it, on account of the very important part which Margaret of Anjou performed in the quarrel.

The difficulty originated among the children and descendants of King Edward III....