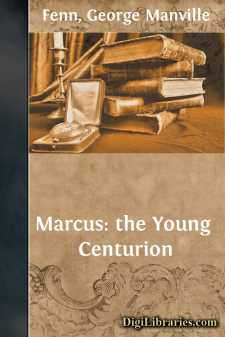 Hot as hot. Through the open window, where a couple of long shoots of one of the grapevines hung down, partially shading the room within, a broad, glowing ray of light, which made the shadows near look purply black, streamed right across the head of Marcus, a Roman lad of about eighteen, making his close, curly, brown hair glisten as if some of the threads were of gold, while the light twinkled on the tiny dew-like drops that stood out on the boy’s brown forehead and by the sides of his slightly aquiline nose.

The side of his head was down upon the table and his hands outspread upon either side; a wax-covered tablet had escaped from his left, and a pointed stylus, with which he had been making a line of characters upon the wax, had slipped from his right fingers, for he was sleeping like a top.

All was wonderfully still in the Roman villa, and, from time to time, a slight puff of air which came cool from the mountains, but grew hot before it reached the house, sent one of the vine strands swinging to and fro like a pendulum, while the other, having secured itself to an outer shutter by one of its tendrils, remained motionless.

The one that swung to and fro kept up its motion the more easily from the fact that it was weighted by a closely-set bunch of grapes of a pearly green on one side, but on the other, facing the sun, beginning to be tinged with a soft purple hue. Upon one of these berries a great fly, which seemed to be clad in a coat of golden armour, sat with its face away from the sun as if listening to the sleeping boy, who every now and then uttered a low, buzzing sound which seemed to have attracted the fly from the outer sunshine to dart to the window with a similar kind of hum, buzz round for a few moments, and then settle upon the grape.

There was not much similarity in the two sounds, simply because the fly made his by the rapid motion of the wings, while Marcus produced his softly through his nose. In plain English, Marcus, the Roman boy, son of Cracis, the famous senator, tired out by the heat, had gone to sleep over his studies, snoring like an English lad of this year of grace, nearly two thousand years later on in the progress of the world.

So Marcus snored, not loudly and unpleasantly, but with a nice, soft, humming note; and the great, golden-green fly sat on the grape and seemed to watch him.

It was very still in the simple Roman villa on the steep slope of the hillside—a hill which looked like a young mountain, an offset of the beautiful spur that ran upward from the vineyard farms and villas of the campagna towards the purple shades of the great range far, far away.

But now and again other sounds floated into the shadowy room past the bright bar of golden light which crossed the boy as he slept.

There was the uneasy, querulous bleating of a goat, answered by the impatient cry of a kid, and now and again the satisfied grunting of pigs, though in those days they called them swine, of which there were several basking in the sunshine in the little farm attached to the villa, the little herd having shortly before returned from a muddy pool, dripping and thickly coated, after a satisfying wallow, to lay themselves down to dry and sleep in peace, the mud having dried into a crackling coat of armour which protected them from the flies....