Many Ways for Cooking Eggs 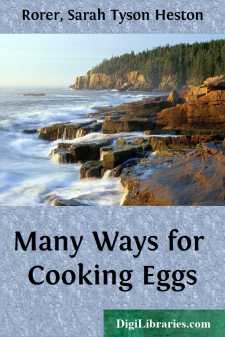 The philosophy of a sauce, when understood, enables even an untrained cook to make a great variety of every day sauces from materials usually found in every household; to have them uniform, however, flavorings must be correctly blended, and measurements must be rigidly observed. Two level tablespoonfuls of butter or other fat, two level tablespoonfuls of flour, must be used to each half pint of liquid. If the yolks of eggs are added, omit one tablespoonful of flour or the sauce will be too thick. Tomato sauce should be flavored with onion, a little mace, and a suspicion of curry. Brown sauce may be simply seasoned with salt and pepper, flavored and colored with kitchen bouquet. Spanish sauce should also be flavored with mushrooms, or if you can afford it, a truffle, a little chopped ham, a tablespoonful of chives, shallot and garlic. Water sauce, drawn butter and simple sauce Hollandaise, when they are served with fish, must be flavored with a dash of tarragon vinegar, salt and pepper.

Rub two tablespoonfuls of butter and the flour together, add the boiling water, stir until boiling, add the salt and pepper; take from the fire, add the remaining tablespoonful of butter and it is ready for use. It must not be boiled after the last butter is added.

Make English drawn butter and add to it, when done, the yolks of two eggs beaten with two tablespoonfuls of water; cook until thick and jelly-like, take from the fire and add one tablespoonful of tarragon vinegar or the juice of half a lemon.

Rub two teaspoonfuls of anchovy essence with the butter and flour and then finish the same as English drawn butter.

Rub the butter and flour together, add the stock and the milk and stir until boiling; add the salt and pepper, take from the fire and add the beaten yolk of the egg, heat for a moment over hot water, and it is ready for use.

Make an English drawn butter, and, just at serving time, add a half cupful of freshly grated horseradish. If you are obliged to use that preserved in vinegar, press it perfectly dry before using it.

Rub the butter and flour together, add the milk cold and stir until boiling; add the pepper and salt and it is ready for use.

Melt the butter, brown it and then skim; pour it carefully into a clean saucepan, add the vinegar, catsup and stock, boil a minute, and it is ready for use....