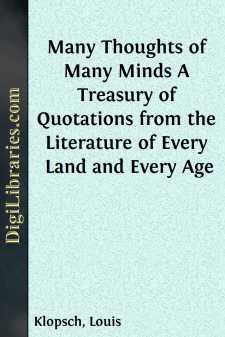 Many Thoughts of Many Minds.

Ability.—No man is without some quality, by the due application of which he might deserve well of the world; and whoever he be that has but little in his power should be in haste to do that little, lest he be confounded with him that can do nothing.—Dr. Johnson.

We judge ourselves by what we feel capable of doing, while others judge us by what we have already done.—Longfellow.

Every person is responsible for all the good within the scope of his abilities, and for no more.—Gail Hamilton.

The possession of great powers no doubt carries with it a contempt for mere external show.—James A. Garfield.

An able man shows his spirit by gentle words and resolute actions.—Chesterfield.

Absolution.—No man taketh away sins (which the law, though holy, just and good, could not take away), but He in whom there is no sin.—Bede.

He alone can remit sins who is appointed our Master by the Father of all; He only is able to discern obedience from disobedience.—St. Clement of Alexandria.

It is not the ambassador, it is not the messenger, but the Lord Himself that saveth His people. The Lord remaineth alone, for no man can be partner with God in forgiving sins; this office belongs solely to Christ, who taketh away the sins of the world.—St. Ambrose.

It appertaineth to the true God alone to be able to loose men from their sins.—St. Cyril.

Neither angel, nor archangel, nor yet even the Lord Himself (who alone can say "I am with you"), can, when we have sinned, release us, unless we bring repentance with us.—St. Ambrose.

Action.—The thing done avails, and not what is said about it.—Emerson.

Action may not always bring happiness; but there is no happiness without action.—Beaconsfield.

To the valiant actions speak alone.—Smollett.

It is well to think well: it is divine to act well.—Horace Mann.

Active natures are rarely melancholy. Activity and melancholy are incompatible.—Bovee.

Not enjoyment, and not sorrow,Is our destined end or way;But to act, that each to-morrowFinds us farther than to-day.    * * * * Trust no Future, howe'er pleasant!Let the dead Past bury its dead!Act, act, in the living Present...!
Show more
Show less