Manual of the Mother Church The First Church of Christ Scientist in Boston, Massachusetts 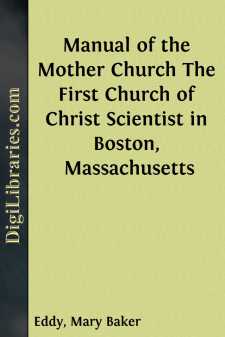 of The Mother Church

The First Church of Christ, Scientist

To be signed by those uniting with The First Church of Christ, Scientist, in Boston, Mass.

1. As adherents of Truth, we take the inspired Word of the Bible as our sufficient guide to eternal Life.

3. We acknowledge God's forgiveness of sin in the destruction of sin and the spiritual understanding that casts out evil as unreal. But the belief in sin is punished so long as the belief lasts.

4. We acknowledge Jesus' atonement as the evidence of divine, efficacious Love, unfolding man's unity with God through Christ Jesus the Way-shower; and we acknowledge that man is saved through Christ, through Truth, Life, and Love as demonstrated by the Galilean Prophet in healing the sick and overcoming sin and death.

5. We acknowledge that the crucifixion of Jesus and his resurrection served to uplift faith to understand eternal Life, even the allness of Soul, Spirit, and the nothingness of matter.

6. And we solemnly promise to watch, and pray for that Mind to be in us which was also in Christ Jesus; to do unto others as we would have them do unto us; and to be merciful, just, and pure.

In the spring of 1879, a little band of earnest seekers after Truth went into deliberations over forming a church without creeds, to be called the "CHURCH OF CHRIST, SCIENTIST." They were members of evangelical churches, and students of Mrs. Mary Baker Eddy in Christian Science, and were known as "Christian Scientists."

At a meeting of the Christian Scientist Association, April 12, 1879, on motion of Mrs. Eddy, it was voted,—To organize a church designed to commemorate the word and works of our Master, which should reinstate primitive Christianity and its lost element of healing.

Mrs. Eddy was appointed on the committee to draft the Tenets of the Mother Church—the chief corner stone whereof is, that Christian Science, as taught and demonstrated by our Master, casts out error, heals the sick, and restores the lost Israel: for "the stone which the builders rejected, the same is become the head of the corner."

The charter for the Church was obtained June, 1879,[1] and the same month the members, twenty-six in number, extended a call to Mary Baker Eddy to become their pastor. She accepted the call, and was ordained A. D. 1881. Although walking through deep waters, the little Church went steadily on, increasing in numbers, and at every epoch saying,

"Hitherto hath the Lord helped us."

On the twenty-third day of September, 1892, at the request of Rev. Mary Baker Eddy, twelve of her students and Church members met and reorganized, under her jurisdiction, the Christian Science Church and named it, THE FIRST CHURCH OF CHRIST, SCIENTIST.

At this meeting twenty others of Mrs. Eddy's students and members of her former Church were elected members of this Church,—those with others that have since been elected were known as "First Members." The Church Tenets, Rules, and By-Laws, as prepared by Mrs....