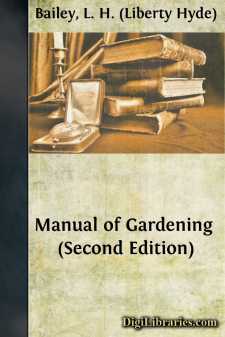 Mulches also serve a most useful purpose in preventing the ground from packing and baking by the weight of snows and rains, and the cementing action of too much water in the surface soil. In the spring, the coarser parts of the mulch may be removed, and the finer parts spaded or hoed into the ground.

Tender bushes and small trees may be wrapped with straw, hay, burlaps, or pieces of matting or carpet. Even rather large trees, as bearing peach trees, are often baled up in this way, or sometimes with corn fodder, although the results in the protection of fruit-buds are not often very satisfactory. It is important that no grain is left in the baling material, else mice may be attracted to it. (The danger of gnawing by mice that nest in winter coverings is always to be anticipated.) It should be known, too, that the object in tying up or baling plants is not so much to protect from direct cold as to mitigate the effects of alternate freezing and thawing, and to protect from drying winds. Plants may be wrapped so thick and tight as to injure them.

The labor of protecting large plants is often great and the results uncertain, and in most cases it is a question whether more satisfaction could not be attained by growing only hardy trees and shrubs.

The objection to covering tender woody plants cannot be urged with equal force against tender herbs or very low bushes, for these are protected with ease. Even the ordinary mulch may afford sufficient protection; and if the tops kill back, the plant quickly renews itself from near the base, and in many plants--as in most hybrid perpetual roses--the best bloom is on these new growths of the season. Old boxes or barrels may be used to protect tender low plants (Figs. 153, 154). The box is filled with leaves or dry straw and either left open on top or covered with boards, boughs, or even with burlaps (Fig. 154).

Connoisseurs of tender roses and other plants sometimes go to the pains of erecting a collapsible shed over the bush, and filling with leaves or straw. Whether this is worth while depends wholly on the degree of satisfaction that one derives from the growing of choice plants (see Roses, in Chap. VIII).

The tops of plants may be laid down for the winter. Figure 155 shows a method of laying down blackberries, as practiced in the Hudson River valley. The plants were tied to a trellis, as the method is in that country, two wires (a, b) having been run on either side of the row. The posts are hinged on a pivot to a short post (c), and are held in position by a brace (d). The entire trellis is then laid down on the approach of winter, as shown in the illustration. The blackberry tops are so strong that they hold the wires up from the ground, even when the trellis is laid down. To hold the wires close to the earth, stakes are thrust over them in a slanting position, as shown at n n. The snow that drifts through the plants ordinarily affords sufficient protection for plants which are as hardy as grapes and berries. In fact, the species may be uninjured even without cover, since, in their prostrate position, they escape the cold and drying winds.

In severe climates, or in the case of tender plants, the tops should be covered with straw, boughs, or litter, as recommended for regular mulch-covers....