Manners, Customs, and Dress During the Middle Ages and During the Renaissance Period 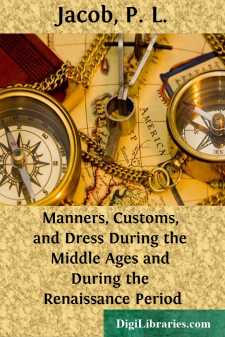 he several successive editions of "The Arts of the Middle Ages and Period of the Renaissance" sufficiently testify to its appreciation by the public. The object of that work was to introduce the reader to a branch of learning to which access had hitherto appeared only permitted to the scientific. That attempt, which was a bold one, succeeded too well not to induce us to push our researches further. In fact, art alone cannot acquaint us entirely with an epoch. "The arts, considered in their generality, are the true expressions of society. They tell us its tastes, its ideas, and its character." We thus spoke in the preface to our first work, and we find nothing to modify in this opinion. Art must be the faithful expression of a society, since it represents it by its works as it has created them--undeniable witnesses of its spirit and manners for future generations. But it must be acknowledged that art is only the consequence of the ideas which it expresses; it is the fruit of civilisation, not its origin. To understand the Middle Ages and the Renaissance, it is necessary to go back to the source of its art, and to know the life of our fathers; these are two inseparable things, which entwine one another, and become complete one by the other.

The Manners and Customs of the Middle Ages:--this subject is of the greatest interest, not only to the man of science, but to the man of the world also. In it, too, "we retrace not only one single period, but two periods quite distinct one from the other." In the first, the public and private customs offer a curious mixture of barbarism and civilisation. We find barbarian, Roman, and Christian customs and character in presence of each other, mixed up in the same society, and very often in the same individuals. Everywhere the most adverse and opposite tendencies display themselves. What an ardent struggle during that long period! and how full, too, of emotion is its picture! Society tends to reconstitute itself in every aspect. She wants to create, so to say, from every side, property, authority, justice, &c., &c., in a word, everything which can establish the basis of public life; and this new order of things must be established by means of the elements supplied at once by the barbarian, Roman, and Christian world--a prodigious creation, the working of which occupied the whole of the Middle Ages. Hardly does modern society, civilised by Christianity, reach the fullness of its power, than it divides itself to follow different paths. Ancient art and literature resuscitates because custom insensibly takes that direction. Under that influence, everything is modified both in private and public life. The history of the human race does not present a subject more vast or more interesting. It is a subject we have chosen to succeed our first book, and which will be followed by a similar study on the various aspects of Religious and Military Life.

This work, devoted to the vivid and faithful description of the Manners and Customs of the Middle Ages and Renaissance, answers fully to the requirements of contemporary times....