Man in the Iron Mask (an Essay) 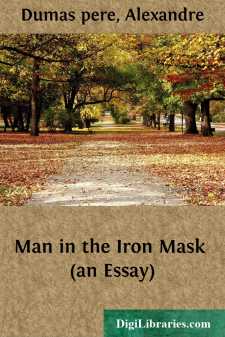 For nearly one hundred years this curious problem has exercised the imagination of writers of fiction—and of drama, and the patience of the learned in history. No subject is more obscure and elusive, and none more attractive to the general mind. It is a legend to the meaning of which none can find the key and yet in which everyone believes. Involuntarily we feel pity at the thought of that long captivity surrounded by so many extraordinary precautions, and when we dwell on the mystery which enveloped the captive, that pity is not only deepened but a kind of terror takes possession of us. It is very likely that if the name of the hero of this gloomy tale had been known at the time, he would now be forgotten. To give him a name would be to relegate him at once to the ranks of those commonplace offenders who quickly exhaust our interest and our tears. But this being, cut off from the world without leaving any discoverable trace, and whose disappearance apparently caused no void—this captive, distinguished among captives by the unexampled nature of his punishment, a prison within a prison, as if the walls of a mere cell were not narrow enough, has come to typify for us the sum of all the human misery and suffering ever inflicted by unjust tyranny.

Who was the Man in the Mask? Was he rapt away into this silent seclusion from the luxury of a court, from the intrigues of diplomacy, from the scaffold of a traitor, from the clash of battle? What did he leave behind? Love, glory, or a throne? What did he regret when hope had fled? Did he pour forth imprecations and curses on his tortures and blaspheme against high Heaven, or did he with a sigh possess his soul in patience?

The blows of fortune are differently received according to the different characters of those on whom they fall; and each one of us who in imagination threads the subterranean passages leading to the cells of Pignerol and Exilles, and incarcerates himself in the Iles Sainte-Marguerite and in the Bastille, the successive scenes of that long-protracted agony will give the prisoner a form shaped by his own fancy and a grief proportioned to his own power of suffering. How we long to pierce the thoughts and feel the heart-beats and watch the trickling tears behind that machine-like exterior, that impassible mask! Our imagination is powerfully excited by the dumbness of that fate borne by one whose words never reached the outward air, whose thoughts could never be read on the hidden features; by the isolation of forty years secured by two-fold barriers of stone and iron, and she clothes the object of her contemplation in majestic splendour, connects the mystery which enveloped his existence with mighty interests, and persists in regarding the prisoner as sacrificed for the preservation of some dynastic secret involving the peace of the world and the stability of a throne.

And when we calmly reflect on the whole case, do we feel that our first impulsively adopted opinion was wrong? Do we regard our belief as a poetical illusion? I do not think so; on the contrary, it seems to me that our good sense approves our fancy's flight. For what can be more natural than the conviction that the secret of the name, age, and features of the captive, which was so perseveringly kept through long years at the cost of so much care, was of vital importance to the Government? No ordinary human passion, such as anger, hate, or vengeance, has so dogged and enduring a character; we feel that the measures taken were not the expression of a love of cruelty, for even supposing that Louis XIV were the most cruel of princes, would he not have chosen one of the thousand methods of torture ready to his hand before inventing a new and strange one? Moreover, why did he voluntarily burden himself with the obligation of surrounding a prisoner with such numberless precautions and such sleepless vigilance? Must he not have feared that in spite of it all the walls behind which he concealed the dread mystery would one day let in the light? Was it not through his entire reign a source of unceasing anxiety? And yet he respected the life of the captive whom it was so difficult to hide, and the discovery of whose identity would have been so dangerous. It would have been so easy to bury the secret in an obscure grave, and yet the order was never given....