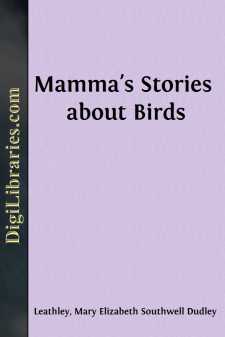 The Eagle is often called the King of Birds, and therefore it is of him that we ought to speak first. Very likely you have often seen eagles in the Zoological Gardens, and, if so, you know what noble looking birds they are. But they seem very sad in their prison-houses, to which no kindness can ever attach them. They are formed to soar boldly to the top of some lonely mountain height, and there dwell far from the abode of men. And to chain them down upon a stunted branch, within reach of all who like to go and gaze upon them, seems treating them unworthily. One can almost fancy that they show by their sullen, brooding attitude, and sparkling eyes, how much they feel themselves degraded and out of place. I cannot tell you that the Eagle is of any real service to man, but every one who has been out amongst the mountains, reckons it a fine sight if he can catch a glimpse of one or more of these noble birds soaring in the air. Eagles are found in every country where there are mountains. In Ireland, and sometimes in England and Scotland, the large golden eagle is found, and is a very fine bird. In America there is an eagle called the Bird of Washington, which is so large that its wings spread out from seven to ten feet. The body of the bird is not so very much larger than a goose; but, as this eagle can fly as many as 140 miles in an hour, it wants very large strong wings to bear it onwards. The North American Indians—you have heard of them, have you not?—fine handsome looking men they are, though copper-coloured; and in former times before Columbus first found out America, the whole of that vast continent belonged to the Indians and had no other inhabitants;—well, these men have a great feeling of reverence for the eagle. They admire him very much, because he is bold, active, watchful, and patient in bearing with want. All these qualities the Indians value in men, and they say the eagle is noble above all birds because he possesses them. But for all that they kill him, and will watch for days to get a chance of shooting their prize. And they think his feathers the very finest ornament they can wear, and on grand occasions the chiefs deck themselves with eagles' plumes as a sign of their rank. These feathers are also used by them in making arrows. For the feathers of the eagle do not get spoiled by wet or pressure, as those of other birds would do, but always remain firm and strong.

Another eagle is called the Erne, White-tailed, or Sea Eagle. These birds live near the sea-shore, and feed upon fish. Their sight is so piercing that they can mark a fish swimming far below them as they hover over the water, and, pouncing down, will strike their strong talons into it, and steer themselves and their prey ashore by their great outspread wings. The African Eagle is said to be very generous in his disposition, and certainly deserves to be called kingly. Although he will not allow any large bird to dwell in peace too near him, yet he never harms the little warblers who flutter round his nest....