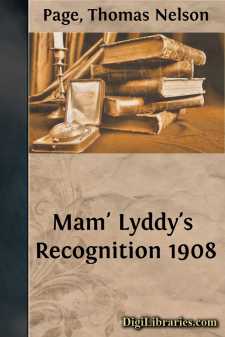 When Cabell Graeme was courting pretty Betty French up at the Château place, though he had many rivals and not a few obstacles to overcome, he had the good fortune to secure one valuable ally, whose friendship stood him in good stead. She was of a rich chocolate tint, with good features, and long hair, possibly inherited from some Arab ancestor, bead-like black eyes, and a voice like a harp, but which on occasion could become a flame. Her figure was short and stocky; but more dignity was never compressed within the same number of cubic inches.

Mam' Lyddy had been in the French family all her life, as her mother and grandmother had been before her. She had rocked on her ample bosom the best part of three generations. And when Freedom came, however much she may have appreciated being free, she had much too high an estimate of the standing of the Frenches to descend to the level of the class she had always contemned as "free niggers." She was a deep-dyed aristocrat.

The Frenches were generally esteemed to be among the oldest and best families in the county, and the Château plantation, with its wide fields and fine old mansion, was commonly reckoned one of the finest in that section. But no such comparative statement would have satisfied Mam' Lyddy. She firmly believed that the Frenches were the greatest people in the world, and it would have added nothing to her dignity had they been princes, because it could have added nothing to it to be told that she was a member of a royal house. Part mentor, part dependent, part domestic, she knew her position, and within her province her place was as unquestioned as was that of her mistress, and her advice was as carefully considered.

Caesar, her husband, a tall, ebony lath, with a bald head and meek eyes, had come out of another family and was treated with condescension. No one knew how often he was reminded of his lower estate; but it was often enough, for he was always in a somewhat humble and apologetic attitude.

The Frenches were known as a "likely" family, but Betty, with her oval face, soft eyes, and skin like a magnolia flower, was so undeniably the beauty that she was called "Pretty Betty." She was equally undeniably the belle. And while the old woman, who idolized her, found far more pleasure than even her mother in her belleship, she was as watchful over her as Argus. Every young man of the many who haunted the old French mansion among its oaks and maples had to meet the scrutiny of those sharp, tack-like eyes. The least slip that one made was enough to prove his downfall. The old woman sifted them as surely as she sifted her meal, and branded them with an infallible instinct akin to that of a keen watchdog. Many a young man who passed that silent figure without a greeting, or spoke lightly of some one, unheeding her presence, wondered at his want of success and felt without knowing why that he was pulling against an unseen current.

Happily for Cabell Graeme, he had the old woman's approval. In the first place, he was related to the Frenches, and this in her eyes was a patent of gentility. Then, he had always been kind to little Betty and particularly civil to herself. He not only never omitted to ask after her health, but also inquired as to her pet ailments of "misery in her foot" and "whirlin' in her head," with an interest which flattered her deeply....