Making the House a Home

by Edgar A. (Edgar Albert) Guest 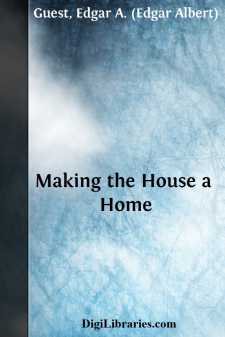 Making the House a Home

We have been building a home for the last fifteen years, but it begins to look now as though it will not be finished for many years to come. This is not because the contractors are slow, or the materials scarce, or because we keep changing our minds. Rather it is because it takes years to build a home, whereas a house can be builded in a few months.

Mother and I started this home-building job on June 28th, 1906. I was twenty-five years of age; and sheвЂ”well, it is sufficient for the purposes of this record to say that she was a few years younger. I was just closing my career as police reporter for the Detroit "Free Press," when we were married. Up to a few months before our wedding, my hours had been from three o'clock, in the afternoon, until three o'clock in the morning, every day of the week except Friday. Those are not fit hours for a married manвЂ”especially a young married man. So it was fortunate for me that my managing editor thought I might have possibilities as a special writer, and relieved me from night duty.

It was then we began to plan the home we should build. It was to be a hall of contentment and the abiding place of joy and beauty. And it was all going to be done on the splendid salary of twenty-eight dollars a week. That sum doesn't sound like much now, but to us, in January, 1906, it was independence. The foundation of our first home was something less than five hundred dollars, out of which was also to come the extravagance of a two-weeks' honeymoon trip.

Fortunately for all of us, life does not break its sad news in advance. Dreams are free, and in their flights of fancy young folks may be as extravagant as they wish. There may be breakers ahead, and trials, days of discouragement and despair, but life tells us nothing of them to spoil our dreaming.

We knew the sort of home we wanted, but we were willing to begin humbly. This was not because we were averse to starting at the top. Both Mother and I had then, and have now, a fondness for the best things of life. We should have liked a grand piano, and a self-making ice box, and a servant, and an automobile right off! But less than five hundred dollars capital and twenty-eight dollars a week salary do not provide those things.

What we could have would be a comfortable flat, and some nice furniture. We'd pay cash for all we could, and buy the remainder of the necessary things on time. We had found a wonderful, brand-new flat which we could rent for twenty-five dollars a month. It had hardwood floors, steam heat, two big bedrooms, a fine living room with a gas grate, a hot-water heater for the bath, and everything modern and convenient. To-day the landlord would ask ninety dollars a month for that place and tell you he was losing money at that.