Make or Break or, The Rich Man's Daughter 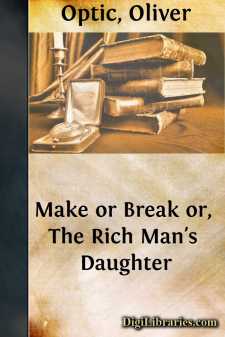 "Next gentleman!" said André Maggimore, one of the journeyman barbers in the extensive shaving saloon of Cutts & Stropmore, which was situated near the Plutonian temples of State Street, in the city of Boston.

"Next gentleman!" repeated André, in tones as soft and feminine as those of a woman, when no one responded to his summons.

"My turn?" asked a spare young man of sixteen, throwing down the Post, with a languid air, and rising to his feet.

"Yes, sir," replied André, politely; and if the speaker had been out of sight, one would have supposed it was a lady who spoke. "Have your hair cut?"

The barber seemed to be startled by the announcement, though there was not the faintest smile on his face to discourage the candidate for tonsorial honors. The young man looked important, threw his head back, pursed up his lips, and felt of his chin, on which there was not the slightest suspicion of a beard visible to the naked eye. Mr. Fitzherbert Wittleworth would not have been willing to acknowledge that he had not been shaved for three weeks; but no one could have discovered the fact without the aid of a powerful microscope.

Mr. Wittleworth spread out his attenuated frame in the barber's chair, and dropped his head back upon the rest. André looked as grave and serious as though he had been called to operate upon the face of one of the venerable and dignified bank presidents who frequented the shop. He was a journeyman barber, and it was his business to shave any one who sat down in his chair, whether the applicant had a beard or not. If André's voice was soft and musical, his resemblance to the gentler sex did not end there, for his hand was as silky and delicate, and his touch as velvety, as though he had been bred in a boudoir.

He adjusted the napkin to the neck of the juvenile customer with the nicest care, and then, from the force of habit, passed his downy hand over the face upon which he was to operate, as if to determine whether it was a hard or a tender skin. Several of the customers smiled and coughed, and even the half-dozen journeymen were not unmoved by the spectacle.

"What are you going to do, Fitz?" asked the occupant of the adjoining chair, who had just straightened himself up to be "brushed off."

"I'm going to have a shave," answered Mr. Wittleworth, as confidently as though the proceedings were entirely regular.

"To have my beard taken off, of course. What do you shave for?"

"Put on the cream, and let the cat lick it off."

"That's a venerable joke. I dare say the barber did not gap his razor when he shaved you. I always feel better after I have been shaved," added Mr. Wittleworth, as André laid a brush full of lather upon his smooth chin.

Those in the shop chuckled, and some of them were ill-mannered enough to laugh aloud, at the conceit of the young man who thus announced to the world that his beard had grown. Even the proprietors of the extensive shaving saloon looked uncommonly good-natured, though it was not prudent for them to rebuke the ambition of the prospective customer....