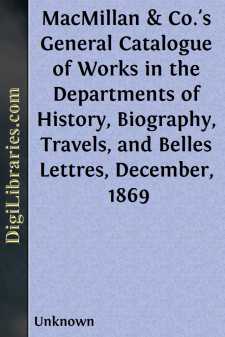 THE NILE TRIBUTARIES OF ABYSSINIA, and the Sword-Hunters of the Hamran Arabs. By Sir Samuel W. Baker, M.A., F.R.C.S. With Portraits, Maps, and Illustrations. Third Edition, 8vo. 21s.

Sir Samuel Baker here describes twelve months' exploration, during which he examined the rivers that are tributary to the Nile from Abyssinia, including the Atbara, Settite, Royan, Salaam, Angrab, Rahad, Dinder, and the Blue Nile. The interest attached to these portions of Africa differs entirely from that of the White Nile regions, as the whole of Upper Egypt and Abyssinia is capable of development, and is inhabited by races having some degree of civilization; while Central Africa is peopled by a race of savages, whose future is more problematical.

THE ALBERT N'YANZA Great Basin of the Nile, and Exploration of the Nile Sources. New and cheaper Edition, with Portraits, Maps, and Illustrations. Two vols. crown 8vo. 16s.

"Bruce won the source of the Blue Nile; Speke and Grant won the Victoria source of the great White Nile; and I have been permitted to succeed in completing the Nile Sources by the discovery of the great reservoir of the equatorial waters, the Albert N'yanza, from which the river issues as the entire White Nile."—Preface.

"A story of adventure by sea and land in the good old style. It appears to us to be the best book of the kind since 'Masterman Ready,' and it runs that established favourite very close."—Pall Mall Gazette.

"No book written for boys has for a long time created so much interest, or been so successful. Every parent ought to provide his boy with a copy."—Daily Telegraph.

The First Part of this work, originally read before the Statistical Society of London, deals with the Amount of Taxation; the Second Part, which now constitutes the main portion of the work, is almost entirely new, and embraces the important questions of Rating, of the relative Taxation of Land, Personalty, and Industry, and of the direct effect of Taxes upon Prices. The author trusts that the body of facts here collected may be of permanent value as a record of the past progress and present condition of the population of the United Kingdom, independently of the transitory circumstances of its present Taxation.

Part I.—Classification of the Population, Upper, Middle, and Labour Classes. II.—Income of the United Kingdom.

"A painstaking and certainly most interesting inquiry."—Pall Mall Gazette.

Four Lectures, dealing with (1) The Congress of Westphalia; (2) Systems of Policy; (3) Diplomacy, Past and Present; (4) The Obligations of Treaties....