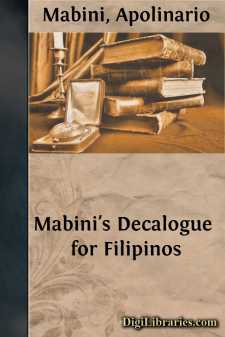 Mabini was undoubtedly the most profound thinker and political philosopher that the Pilipino race ever produced. Some day, when his works are fully published, but not until then, Mabini will come into his own. A great name awaits him, not only in the Philippines, for he is already appreciated there, but in every land where the cause of liberty and human freedom is revered.

Mabini was born in Tanawan, province of Batangas, island of Luzon, P.I., of poor Filipino parents, in 1864. He received his education in the "Colegio de San Juan de Letran." Manila, and in the University of Santo Tomas. He supported himself while studying by his own efforts, and made a brilliant record in both institutions. Later he devoted his energies to the establishment of a private school in Manila and to legal work.

Mabini came to the front in 1898 during the Pilipino revolution against Spain. In the subsequent revolution against the United States he became known as "the brains of the revolution." He was so considered by the American army officers, who bent every energy to capture him.

He was the leading adviser of Aguinaldo, and was the author of the latter's many able decrees and proclamations. Mabini's official position was President of the Council of Secretaries, and he also held the post of Secretary of the Exterior.

One of Mabini's greatest works was his draft of a constitution for the Philippine Republic. It was accompanied by what he called "The True Decalogue," published in the pages following. Mabini's "ten commandments" are so framed as to meet the needs of Filipino patriotism for all time. He also drafted rules for the organization and government of municipalities and provinces, which were highly successful because of their adaptability to local conditions.

Mabini remained the head of Aguinaldo's cabinet until March, 1899, when he resigned. But he continued in hearty sympathy with the revolution, however, and his counsel was frequently sought.

Mabini was arrested by the American forces in September, 1899, and remained a prisoner until September 23, 1900. Following his release, he lived for a while in a suburb of Manila, in a poor nipa house, under the most adverse and trying circumstances. He was in abject poverty.

In spite of his terrible suffering from paralysis, Mabini continued writing. He severely criticised the government, voicing the sentiments of the Filipino people for freedom. He was ordered to desist, but to this, in one of his writings to the people, he replied: "To tell a man to be quiet when a necessity not fulfilled is shaking all the fibers of his being is tantamount to asking a hungry man to be filled before taking the food which he needs."

Mabini's logic was a real embarrassment to the American military forces, and in January, 1901, he was arrested a second time by the Americans. This time he was exiled to the island of Guam, where he remained until his return to Manila on February 26, 1903.