Lynton and Lynmouth A Pageant of Cliff & Moorland 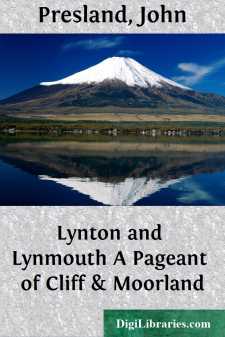 The original Celtic name for Devonshire, the name used by the Britons whom Caesar found here when he landed, was probably "Dyfnaint," for a Latinized form of it, "Dumnonia" or "Damnonia," was used by Diodorus Siculus when writing of the province of Devon and Cornwall in the third century A.D. So that the name by which the men of Devon call their country is the name by which those ancient men called it who erected the stone menhirs on Dartmoor, and built the great earth-camp of Clovelly Dykes, or the smaller bold stronghold of Countisbury. At least, conjecturally this is so, and it is pleasant to believe it, for it links the Devon of our own day, the Devon of rich valleys and windy moors, the land of streams and orchards, of bleak, magnificent cliff and rock-guarded bay, of shaded combe and suave, fair villages, in an unbroken tradition of name and habitation with the men of that silent and vanished race.

Up and down the length of England, from the Land's End to the Northumbrian dales, lie the traces of these far-off peoples whose very names are faint guesses preserved only in the traditions of local speech. Strangely and suddenly we come upon the evidence of their life and death: here a circle of stones on a barren moor or bleak hilltop, there a handful of potsherds or a flint arrowhead; sometimes, indeed, though rarely, the bones of their very bodies, laid aside in earth-barrows or stone coffins for this unknown length of years. And there the most unreflective among us feels a sudden awe and wonder at the momentary vision of the profound antiquity of this land in which we live, and for a few moments all desires and aims seem futile in face of this immemorial past.

Only for a few moments, though, and then we step from the "Druid Circle," or turn away from the barrow, and the current of our everyday life takes us up once more.

Myself, I agree with Westcote. Westcote is a charming old gentleman of King James the First's time, who wrote a book called "A View of Devonshire in 1630." In Chapter I he discusses the ancient name of Devonshire much as I have done, but because in the seventeenth century you must have a Latin or a Greek at your elbow to give you respectability as a writer, he brings forward a formidable array of authorities—Ptolemaeus, Solinus Pylyhistor, and Diodorus Siculus. But, having had them make their bow before the reader, he remarks that all these gentlemen lived "far remoted" from Devonshire, and were therefore liable to error in the transmission of names; "for, in my opinion," says he, "those that declare the first names of strange countries far remoted are as the poor which wear their garments all bepatched and pieced, whereof the pieces that are added are much more in quantity of cloth than the garment before, when it was first made."

As an example of this error he instances the name of Peru. "When the Spaniards had conquered Mexico, and were purposing to proceed farther, their commander, in his manner, demanded of one of the natives he met withal what the country was named, who answered, 'Peru,' by which name it is known unto this day, which in his language was, 'I know not what you say.'"

Even more fantastic is the etymological origin of Andaluzia, for the poor countryman of this story, when addressed by the conquering Moor, merely remarked surlily to his ass, "gee-up Luzia!" or, in his own tongue, "Ando Luzia!" which was taken by the Moor in remarkable good faith, and has ever after been the name of that province....