Lundy's Lane and Other Poems 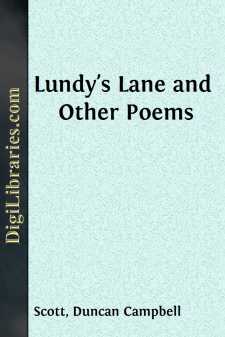 Many's the day I've had since then to dig and delve—

But those are the years I remember as the brightest years of all,

When we left the plow in the furrow to follow the bugle's call.

Why, even our son Abner wanted to fight with the men!

"Stay with your mother!" I said, and he looked so old and grim—

He was just sixteen that April—I couldn't believe it was him;

But I didn't think—I was off—and we met the foe again,

Five thousand strong and ready, at the hill by Lundy's Lane.

There as the night came on we fought them from six to nine,

Whenever they broke our line we broke their line,

They took our guns and we won them again, and around the levels

Where the hill sloped up—with the Eighty-ninth,—we fought like devils

Around the flag;—and on they came and we drove them back,

Until with its very fierceness the fight grew slack.

It was then about nine and dark as a miser's pocket,

When up came Hercules Scott's brigade swift as a rocket,

And charged,—and the flashes sprang in the dark like a lion's eyes;

The night was full of fire—groans, and cheers, and cries;

Then through the sound and the fury another sound broke in—

The roar of a great old duck-gun shattered the rest of the din;

It took two minutes to charge it and another to set it free.

Every time I heard it an angel spoke to me;

Yes, the minute I heard it I felt the strangest tide

Flow in my veins like lightning, as if, there, by my side,

Was the very spirit of Valor. But 'twas dark—you couldn't see—

And slid down to the clover, and lay there still;

Something went through me—piercing—with a strange, swift thrill;

The noise fell away into silence, and I heard as clear as thunder

The long, slow roar of Niagara: O the wonder

Of that deep sound. But again the battle broke

And the foe, driven before us desperately—stroke upon stroke,

Left the field to his master, and sullenly down the road

Sounded the boom of his guns, trailing the heavy load

Of his wounded men and his shattered flags, sullen and slow,

Setting fire in his rage to Bridgewater mills and the glow

Flared in the distant forest. We rested as we could,

And for a while I slept in the dark of a maple wood:

But when the clouds in the east were red all over,

I came back there to the place we made the stand in the clover;

For my heart was heavy then with a strange deep pain,

As I thought of the glorious fight, and again and again

I remembered the valiant spirit and the piercing thrill;

But I knew it all when I reached the top of the hill,—

For there, there with the blood on his dear, brave head,

There on the hill in the clover lay our Abner—dead!—

But every time that I tell it I feel the old, cold shock,

I'm eighty-one my next birthday—do you breed such fellows now...?