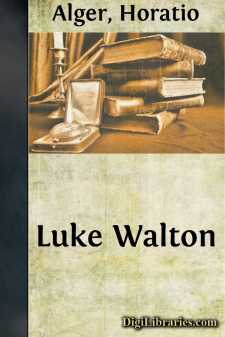 CHAPTER I A CHICAGO NEWSBOY

"News and Mail, one cent each!"

Half a dozen Chicago newsboys, varying in age from ten to sixteen years, with piles of papers in their hands, joined in the chorus.

They were standing in front and at the sides of the Sherman House, on the corner of Clark and Randolph Streets, one of the noted buildings in the Lake City. On the opposite side of Randolph Street stands a gloomy stone structure, the Court House and City Hall. In the shadow of these buildings, at the corner, Luke Walton, one of the largest newsboys, had posted himself. There was something about his bearing and appearance which distinguished him in a noticeable way from his companions.

To begin with, he looked out of place. He was well grown, with a frank, handsome face, and was better dressed than the average newsboy. That was one reason, perhaps, why he preferred to be by himself, rather than to engage in the scramble for customers which was the habit of the boys around him.

It was half-past five. The numerous cars that passed were full of business men, clerks, and boys, returning to their homes after a busy day.

Luke had but two papers left, but these two for some unaccountable reason remained on his hands an unusual length of time. But at length a comfortable-looking gentleman of middle age, coming from the direction of La Salle Street, paused and said, "You may give me a News, my boy."

The gentleman took the paper, and thrusting his hand into his pocket, began to feel for a penny, but apparently without success.

"I declare," he said, smiling, "I believe I am penniless. I have nothing but a five-dollar bill."

"Never mind, sir! Take the paper and pay me to morrow."

"I am generally here about this time."

"And if I shouldn't see you, you will lose the penny."

"You appear to have confidence in me."

"Then it is only fair that I should have confidence in you."

Luke looked puzzled, for he didn't quite understand what was in the gentleman's mind.

"I will take both of your papers. Here is a five-dollar bill. You may bring me the change to-morrow, at my office, No. 155 La Salle Street. My name is Benjamin Afton."

"But, sir," objected Luke, "there is no occasion for this. It is much better that I should trust you for two cents than that you should trust me with five dollars."

"Probably the two cents are as important to you as five dollars to me. At any rate, it is a matter of confidence, and I am quite willing to trust you."

"I shall have to leave you, or I shall be home late to dinner."

Before Luke had a chance to protest further, he found himself alone, his stock of papers exhausted, and a five-dollar bill in his hand.

While he stood on the corner in some perplexity, a newsboy crossed Randolph Street, and accosted him.

"A gentleman just bought two papers of me."

"And gave you five dollars!...